Angel Aquino considers her first Urian as a 'stamp of approval' 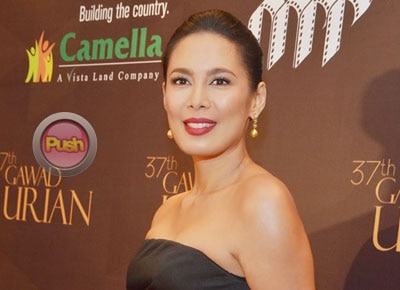 Many were surprised when seasoned actress Angel Aquino revealed in her acceptance speech for the Best Supporting Actress trophy that it was her first time to take home a Gawad Urian award. Considering she has already taken on several memorable and critically-acclaimed roles, many assumed that the actress had already won an Urian.
She won for the Sigrid Andrea Bernardo’s film Ang Huling Cha Cha ni Anita against Mitch Smith (Porno), Ruby Ruiz (Ekstra), Jasmine Curtis-Smith (Transit), and Raquel Villavicencio (Dukit). Angel was a double nominee since she was nominated in the same category twice, for her other film Porno by Adolf Alix Jr.
"Siyempre kinikilig ako! I've been wanting and hoping for this for so long and I finally got it," blurted Angel in an interview after the awarding ceremony. Angel confessed that she was initially weirded out by the idea that she was competing against herself as well as other equally talented stars under the category.
"Nasu-surreal-an ako nung umpisa but then of course it must mean something ‘di ba? It's an honor to have your efforts recognized for both movies kasi mahirap talaga pareho ang pelikula," she noted.
While she thought that her role in Anita opposite young star Teri Malvar who competed under the Best Actress category was different, Angel claimed that she never really expected to bag the award for it.
"Kasi it was between Porno and Anita eh. Mahirap 'yung ginawa ko kasi sa Porno talaga pero I guess 'yung role sa anita talagang umaangat talaga siya eh kasi kakaiba siya eh. She gets crazy tapos maya-maya normal siya," Angel explained.
Another brilliant actress who confessed during that night that she had yet to receive an Urian award was Cherie Gil. "Nagulat nga ako kasi sabi ni Cherie Gil wala pa siyang Urian, sabi ko 'Hindi pwede 'yan!’” Angel shared. Angel said she discovered that Cherie had yet to be acknowledged by the award-giving body after she accepted her award.
She revealed, "Kasi sabi ko 'Pwede na tayong friends kasi may Urian na ako.' Tapos sabi niya, 'I don't even have one!' I was like 'No, imposible 'yan!' Apparently she doesn't have it and she should have a million of these."
The Ikaw Lamang star was nothing but grateful that her efforts were validated and that her being an actress was finally "legitimized" because of the Manunuri ng Pelikulang Pilipino nod.
The long wait for an Urian was worth it for her especially since she's well aware of the fact that the ones behind the award-giving body were highly-respected and learned individuals in the field of entertainment and filmmaking.
"No I guess they are very meticulous and there are a lot of... Sometimes there are better performances and you cannot contend with that so right now I'm just glad that they were happy with my performance," she surmised when asked why she thinks she only got her first Urian.
She continued that she’s very fulfilled as an actress of the moment because, "Based on the introduction of all the Manunuri, kita mo talaga and the way they would explain everything, alam mo na nagdaan talaga sa matinding proseso 'yung pamimili ng bawat nanalo. Actually bawat nominee palang at doon sa mga nominees na napakagagaling nakapili sila ng pinakamagaling doon. Talagang nagdaan sa isang butas ng karayom."
But did she ever feel that she was a "shoo-in" for the citation since she had two entries? "Well somehow nung nalaman ko na dalawa sabi ko 'Siguro naman ibibigay na sa akin 'yun," Angel noted.
She believed that a major factor why she won was maybe because she has portrayed gender-sensitive roles in both the films which were nominated. "Most likely kasi they were sensitive topics and very sensitive roles. And also maybe because both were something that I've never done before. So siguro nakita rin 'yun," Angel said.
Now that she has her much-coveted award, what more is she hoping to achieve? "A Best Actress trophy,” she joked and added, “Why not? We will work on that.”
After portraying a transgender woman and a lesbian, Angel underscored that she doesn't have any other dream role. What she knows though is that she can identify which film to accept or let go. "Wala. I've never had a dream role pero pagkanakatanggap ako ng role alam ko if I can pass it up. Katulad ng Anita, nung nakita ko siya [sabi ko] hindi ko ito papakawalan. Because it's not that I'm going to get an award but it was something that I really wanted to do," she said.
Celebrity