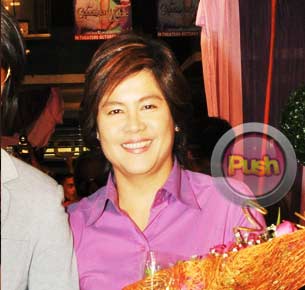 Kathryn Bernardo and Daniel Padilla are obviously closer than ever yet they remain tight-lipped about the real score between them. StarStudio Magazine’s February issue probes into the never-before-heard kilig stories about this hot teen love team through the people who work closely with them on the set of Princess And I.
According to their co-star Dominic Ochoa (who plays Kathryn’s adoptive father in the teleserye), one of the sweetest things about Daniel is the way he takes care of Kathryn’s welfare. He would always wait on her until after she finishes her scenes, even if he’s no longer needed on the set. Riding separate vehicles, there was a time when he followed her car all the way from their on-location shoot at Nagcarlan, Laguna to the Bernardo’s residence in Quezon City, before heading home to Pasig.
Princess and I’s director Rory Quintos also shared a similar incident wherein Daniel was allowed to go home early since he fell ill in the middle of a taping day. “He seemed like he was having an attack. He couldn’t breathe or something,” Direk Rory recalled. Hence, she was shocked to discover that Daniel merely stayed in his own vehicle, obviously sick, but still waiting for Kathryn.
Direk Rory said she believes that whatever’s going on between Kathryn and Daniel is the real thing. “Si DJ is a very sweet boyfriend. Really, he’s a gentleman. Naaalala ko nga si Binoe (Daniel’s uncle, Robin Padilla) sa kanya eh, kasi Padilla na Padilla. Madali talagang ma-in love sa kanya. He’s really very sweet you know. He’s thoughtful and he really loves Kath so much.”
Grab a copy for the perfect teen love story of Daniel and Kathryn in StarStudio Magazine February issue. Another must-read is the Love Gallery featuring 13 hottest couples in showbiz (John Lloyd Cruz-Angelica Panganiban, Dingdong Dantes-Marian Rivera, Zanjoe Marudo-Bea Alonzo, Phil Younghusband-Angel Locsin, Jericho Rosales-Kim Jones, Richard Gutierrez-Sarah Lahbati, Luis Manzano-Jennylyn Mercado, Billy Crawford-Nikki Gil, Christian Bautista-Carla Dunareanu, Gab Valenciano-Coleen Garcia, Jolo Revilla-Jodi Sta. Maria, and Chiz Escudero-Heart Evangelista).
Celebrity