Former beauty queen Vickie Rushton is opening up about her recent wedding to her longtime partner, actor Jason Abalos. 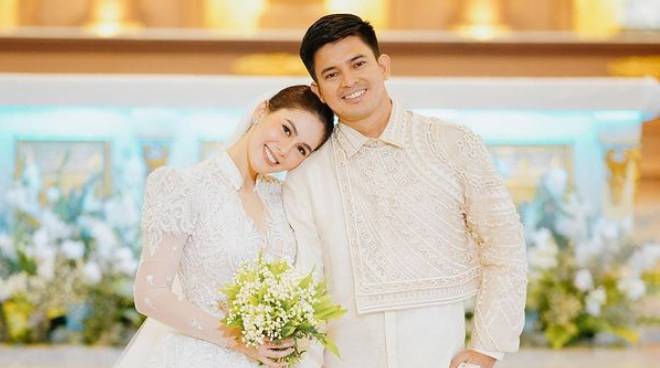 Former beauty queen Vickie Rushton is finally opening up about her recent wedding to her longtime partner, actor Jason Abalos.

In an Instagram post on Wednesday, September 7, Vickie said she and Jason were supposed to get married earlier in the year but, like many other showbiz couples, they, too, had to postpone their wedding due to the COVID-19 pandemic.

“We tried to push through with the original plan (even thought of having a civil wedding first) because everything was almost ready. Unfortunately, my family’s flight got canceled, so that’s when we decided to move the wedding,” she said.

“We replanned and had the most perfect wedding.”

Though they had to wait, she and Jason got their dream wedding – an intimate affair with their family and loved ones that would reflect who they are as a couple: “simple, laidback, and lowkey,” according to Vickie.

“To our wedding suppliers, we can’t thank you enough for your time, effort, ideas, generosity, and love that you have shown and given us in making this day finally happen. Everything’s so beautiful and better than what we have imagined,” she said

“There were days that I’d get so anxious but in the end, it was perfectly planned,” she added. “A HEARTFELT THANK YOU TO ALL OF YOU! Maraming salamat. Madamo gid nga salamat sa inyo tanan.”

The pair announced their engagement last June after being together for more than a decade. They first met in 2010 during a Kapamilya Karavan event in Bacolod, where Vickie is from. They started dating the following year, when Vickie was crowned Mutya ng Pilipinas International 2011.

Vickie, 30, has since retired from pageantry. She announced her retirement a year after she competed in the Binibining Pilipinas pageant in 2018, where she finished first runner-up. Meanwhile, Jason, 37, still works as an actor. He recently delved into politics and was able to secure a seat as a board member in the second district of his hometown of Nueva Ecija.