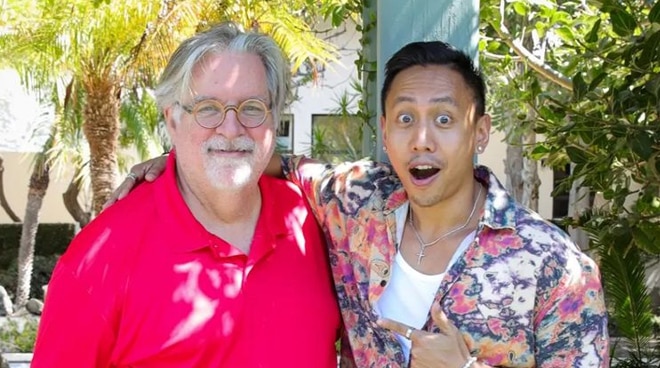 Last month, vlogger Mikey Bustos flew to the US to attend a gathering of the top animal content creators online called AnimalCon USA. Being the founder of AntsCanada, the popular Fil-Canadian YouTuber did a key note presentation on Ant Keeping.

But aside from attending the conference, Mikey also had another unforgettable experience in Florida when he and his partner RJ Garcia met and spent time with American cartoonist Matt Groening who is the creator of The Simpsons, the longest-running cartoon television series, as well as other shows like Futurama and Disenchantment. Last year, Matt sent Mikey a personalized artwork of Homer Simpson with a special dedication for him and his successful YouTube channel AntsCanada which he started in 2009. On that channel, Mikey shares videos about ant-keeping and he also has an online shop which specializes in ant-keeping.

Mikey shared that it was because Matt’s son Nate was a big fan of his AntsCanada channel which is how they formed their connection online. On his Instagram account last September 4, he wrote, “Yup, that's me next to Matt Groening, creator of the Simpsons & Futurama! Today was an incredible day!

“I basically was raised by the Simpsons, waiting with my family every evening to watch what became one of the most successful sitcoms of all time!

“This is why when @appleboyrj and I were invited by the Groening family to their beautiful home in LA, we were floored! Their son Nate is an avid fan of my @AntsCanada channel and is a little ant genius! He has our merch and AC Ant Farms, and knows all the scientific names of the ants in his area and other places of the world. Check out Nate showing me the ants of his backyard in our latest livestream on the #antscanada channel.

“We talked for hours over a delicious lunch of Mexican food about all topics under the sun! Matt, his wife August, Nate, and family were so gracious to us and are so humble and down to earth. I'm happy to have made some new and amazing friends!”

On his second day with The Simpsons creator and his family, Mikey thanked them for their hospitality for letting them stay at their family house in LA and then the beach house in Malibu.

“Day 2 with the Groenings // Spent the whole day hanging out with Matt Groening, family, and friends at their Malibu Vacation Beach House. Talk about a paradise! Sun was out, waves were crazy huge, and food was delicious! We were completely inspired by the experience! Huge thank you to the Groenings for having us! @Appleboyrj and I will never forget this day EVER! ”

In 2019, Mikey and RJ Garcia bought an 82-acre fruit and vegetable farm in Cavite where they built their dream home which they have dubbed as the “Mabuhay Squad Farm.”