Derek Ramsay surprised his wife Ellen Adarna with a brand new car ahead of their first wedding anniversary. 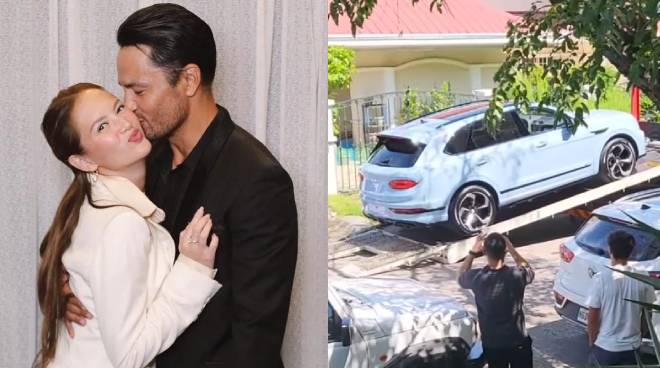 Ellen Adarna was treated to an early anniversary surprise by her husband, Derek Ramsay, who recently gave her a brand new car.

But not just any car! Derek gave his wife a brand new Bentley — and in a rare shade of blue to boot — as seen in a video he posted on Instagram on Wednesday, September 7.

“Advanced happy anniversary to the love of my life. Thank you for giving me so much love. I've really found true happiness. I love you so much!!!! So so much!!” Derek wrote in the caption.

In the comments section of his post, Ellen said she liked the gift, “but you know my love language is physical touch and quality time, so your hugs and kisses are my number 1.”

“I love youuuuuu. I know you’ll enjoy driving my car,” she added.

Ellen and Derek will be celebrating their first anniversary as a married couple this coming November.

The pair tied the knot at a luxury resort in Bataan on November 11, 2021, just eight months after they got engaged. Since getting married, the two have been open about their plans to start their own family, with Derek saying he prefers to have a boy, while Ellen wants a girl.

Ellen already has a son, Elias, with her former partner John Lloyd Cruz. Meanwhile, Derek also has a son from a previous relationship — Austin, who recently graduated from high school.