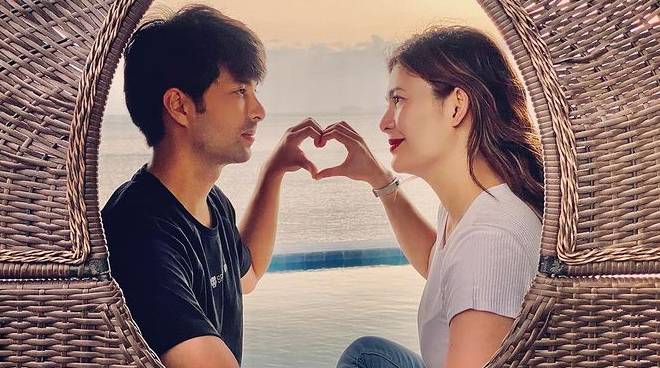 After a successful two season run, iWantTFC returns with the third season of Hoy Love You starting September 30 starring its endearing lead stars Joross Gamboa and Roxanne Guinoo. For season 3, Joross shared that their production has become more collaborative than ever.

READ: Joross Gamboa and Roxanne Guinoo are excited about the second season of 'Hoy, Love You!'

In the series, Jules (Joross) and Marge (Roxanne) are excited to start a new life as they prepare to welcome a new addition to their big stepfamily. But things turn out to not be as smooth-sailing as when they find out that Marge has a delicate pregnancy. Wanting to make sure that his wife is always stress-free and healthy, Jules tries his best to take care of her while taking charge of their construction business. But more problems arise when overly-concerned family and friends meddle in their affairs.

READ: Roxanne Guinoo says her family is supportive of her love team with Joross Gamboa

In real life, Joross shared one of his memorable experiences when his non-showbiz wife Katz was pregnant. The couple now have two children named John Kody and Jace Kyler.

Continuing from the storyline in season 2, the couple will still struggle with the constant nagging of Richard (Dominic Ochoa), Marge’s ex-boyfriend, who not only wants to help in taking care of Marge, but he also suddenly becomes Jules’s competitor as the boss of a new construction firm. Marge and Jules’s mothers, Elizabeth (Carmi Martin) and Malu (Keanna Reeves) also continue to clash as they debate about pregnancy superstitions and effective medical practices.

Their kids will also mature as they become involved in romantic relationships. Charles (Aljon Mendoza), Marge’s son with Richard, will get to know Kara (Karina Bautista) and finally make their relationship official. But their young love will be put to the test when Charles grows jealous of Kara’s childhood friend Kulas (Race Matias), who also happens to be the love interest of JR (Brenna Garcia), Jules’s daughter with his first wife.

More good vibes and ‘kilig’ will unfold in the series with the barkada of Drew (TJ Valderrama), Bart (Yamyam Gucong), and Tommy (Pepe Herrera)—who will experience love at first sight with Agnes (Kate Alejandrino), a mysterious newcomer in their town who they suspect of being an “aswang”.

Hoy, Love You is directed by Theodore Boborol and will stream on the iWantTFC app (iOS and Android) and website (iwanttfc.com) starting September 30. The series is free for all users in the Philippines and is available to premium subscribers outside the Philippines. All episodes of seasons one and two are also still available for free on iWantTFC.