Watch the teaser trailer for the live-action adaptation of Disney’s ‘The Little Mermaid.’ 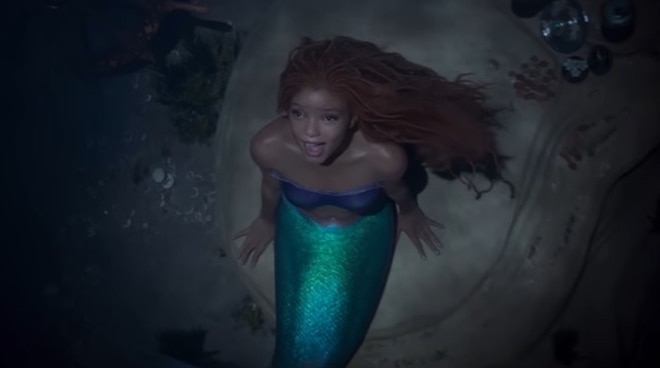 Disney has released the first teaser trailer for the live-action adaptation of the 1989 animated musical fantasy film The Little Mermaid.

The entertainment giant first unveiled the trailer of the movie at the D23 Expo at Anaheim Convention Center.

In the teaser, the public gets to catch a glimpse of actress Halle Bailey taking on the role of Ariel in the highly anticipated live-action adaptation for the first time.

The teaser also gave fans a sneak peek of Halle belting out a line from the iconic theme of the Disney classic, “Part of Your World.”

The movie is directed by Rob Marshall and is written by David Magee. The film is set to be released in theaters in May 2023.

Aside from Halle, The Little Mermaid cast members include Jonah Hauer-King as Eric, Melissa McCarthy as Ursula, Javier Bardem as King Triton, Noma Dumezweni as Queen Selina,  Art Malik as Grimsby, Lorena Andrea as Perla, and Kajsa Mohammar as Karina.

Meanwhile, the actors who will lend their voices to the animal characters in the film are Daveed Diggs for Sebastian, Jacob Tremblay for Flounder, and Awkwafina as Scuttle

It was in July 2019 when Disney first announced that Halle will be playing the role in Little Mermaid.

"It was abundantly clear that Halle possesses that rare combination of spirit, heart, youth, innocence, and substance — plus a glorious singing voice — all intrinsic qualities necessary to play this iconic role," director Rob said upon the announcement of Halle's casting back in 2019.

The movie wrapped up filming in July 2021.

In honor of The Little Mermaid wrapping its production, Halle took to Twitter to chronicle her journey as Ariel in the movie.

After auditioning for this film when I was 18 just about to turn 19 , to now finishing filming through a pandemic when I turned 21. We have finally made it...

I feel so grateful to have experienced this film in all of its glory," Halle posted on her Instagram page in July 2021.

The actress-singer remarked that the whole experience strengthened her as a person saying, "It has been the toughest experience being away from everything and everyone I've ever known, to feeling self-doubt/loneliness, but also feeling such freedom and perseverance as I’ve reached the end. This experience has made me so much stronger than I ever thought I could be."

Halle also extended her gratitude to the team and the cast members of the film.

READ: Halle Bailey to play Ariel in live-action version of ‘The Little Mermaid’

for infinite lifetimes, @jacobtremblay who I’m so proud of

and legends like @bardemantarctic @melissamccarthy @awkwafina @daveeddiggs who are masters of their craft but are so welcoming and open to little old me... as well as to the rest of the beautiful cast and crew. I cannot wait for time to speed up so you all can watch this film because it was made with so much love (plus blood sweat and tears) lol thank you Sardinia for a wonderful ending!!!" she wrote.

The release of the live-action adaptation of The Little Mermaid coincides with the upcoming 100th anniversary celebration of Disney.