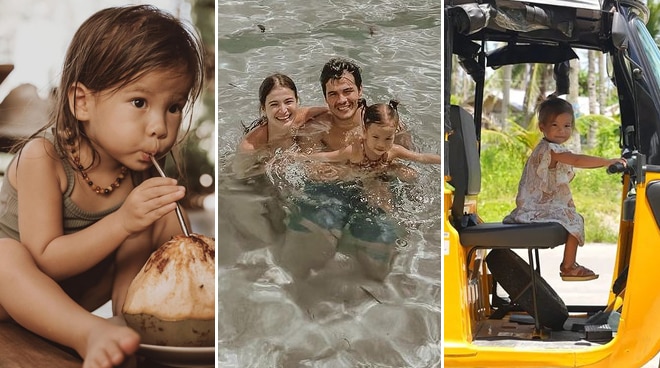 Netizens could not help but gush over Dahlia Amelie, the daughter of Anne Curtis and Erwan Heussaff, who is currently in Siargao with her parents for another family vacation.

Anne took to Instagram over the weekend to share an adorable snap of Dahlia, showing her daughter in her bathing suit while drinking from a buko.

"Got buko?" the actress wrote in her post, which has since garnered 580,000 "likes" and over a thousand comments.

Erwan, for his part, posted photos of Dahlia riding a three-wheeled car on the streets of Santa Fe in General Luna.

"On our way," was his simple caption for the photo set.

Meanwhile, aside from Dahlia, Anne also treated her 18.2 million followers on the app with a family photo, captioned, "My [world]."

Since the start of the year, Anne and Erwan have traveled with their daughter to several places in the Philippines, including Bohol and the luxurious Amanpulo resort in Palawan.

The pair, who have been married since November 2017, quietly welcomed Dahlia in March 2020 in Melbourne, Australia, where Anne was also born.