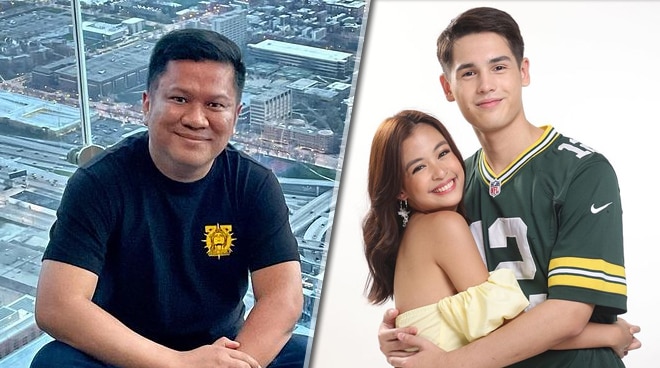 Director Ted Boborol was all praises on Andi Abaya and Kobie Brown, collectively known as KoDrea.

In an exclusive interview with PUSH, the Kapamilya director talked about doing his latest film Connected.

Ted described seeing his actors transform from housemates to “legit” film stars is the glaring difference from making this new film.

“I think one glaring difference from my other films is this film has newbies and they are all from Big Brother. So, it’s interesting how they transform from being housemates to being legit film stars,” he said.

He also discussed the process of doing the film which he said stated with interviews with the cast which resulted to the interconnected stories in the film.

“And then, what’s different also is that this film started by me and the writer interviewing the cast one-on-one. We had an in-depth interview with them. And from there, kung ano ang nalaman namin about their lives, their loves,” he said.

“And ‘yung resulta nun, ‘yun ang story ng connected na interconnecting stories ng two couples in a love triangle. While narrating these love stories, we also get to tackle issues among Gen Zs — on mental health, on gender, and on being woke on this day and age. ‘Yun ‘yung feeling ko difference of this romcom to the other romcoms,” he added.

READ: Kobie Brown reveals secret to love team with Andi Abaya: ‘We both want this so bad’

But what made him excited to do the film was the idea that he will be working with a new production outfit — not to mention the fact that he took on the “producer’s hat” for this latest film.

“Ang pinakaexciting for me is working for a new production company which is Star Magic Studios and then also having a producer’s hat because when they got me to be part of this project, I was the one who was tasked to hire everyone who will be working for the movie,” he said.

With most of his films and TV shows featuring up-and-coming stars, Ted said doing films like Connected simply “never gets old” for him.

“And of course, launching stars is always exciting for me. If you’ve seen my filmography — from my TV shows to my films, it’s always been launching new stars and new loveteams — and it never gets old. I always get excited to work with teens because it’s always fulfilling for me just to see their dreams come true,” he said.

Ted went on to share that doing the film at the height of the pandemic became a challenge for him.

“Of course, the most challenging part is shooting this at the height of the pandemic. I mean, there were still strict protocols then. This was when we shot this. So, ‘yun ‘yung pinakachallenge itself because I’m working with newbies,” he said.

He also shared how meeting his actors in the flesh, conducting look tests, and facilitatiing face-to-face workshops are some of the things he consider before shooting a film — especially if he’s doing a film with a set of new stars.

“It’s very important for me to be able to meet them first and to be able to do face-to-face workshops and look tests before we shoot the movie. I’m thankful naman na nabigyan ako ng pagkakataong iyon,” he said.

Having worked with Andi Abaya and Kobie Brown in the past, Ted could only muster words of praises for the two actors whom he described as “prepared” and “hardworking,” respectively.

READ: Kobie Brown says he and Andi Abaya ‘matured together’ in his first acting project

Ted said he felt as if Andi wasn’t new to her craft as she always came prepared to shoots.

“Prior to this, May of last year, I got Andi. She auditioned for a role in a movie I did na Netflix original. It’s called Entitled. We were looking for an actress who can portray a 15-year-old  para maging sister ni Alex Gonzaga sa movie. So auditioned some young stars and eventually, we picked Andi,” he said.

“I was really surprised by Andi because coming into the set, she was prepared, she knew her markers, and of course, para siyang hindi baguhan sabi ng mga co-stars niya dun. I realized also that she’s been working ever since she was a kid in commercials. So meron na din talaga siyang background sa paggawa ng isang visual medium,” Ted remarked.

Meanwhile, Ted shared how hardworking Kobie is — revealing how he showed his determination throughout the entire filming process.

“Si Kobie, siyempre first time niya ‘yun. I remember him being very nervous. What I liked Kobe is he was really hardworking, he’s very determined to make it. Like right now, if you interview him, he will really make it a point to speak to you in Tagalog para mahasa,” he said.

According to Ted, he couldn’t be any prouder of how the two actors have grown since the first time he worked with them.