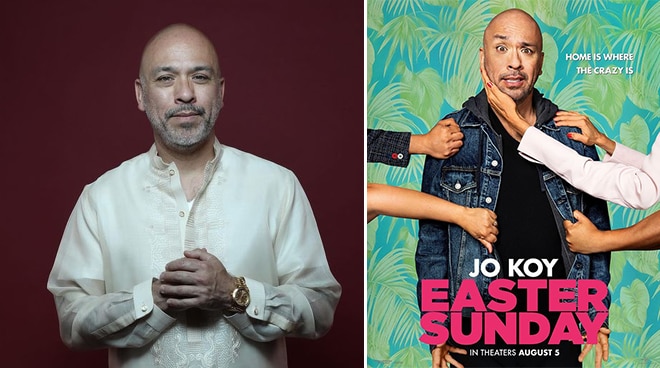 Filipino-American comedian Jo-Koy's first feature film Easter Sunday premiered on August 5 in the US. It's the first major Hollywood film with an all-Filipino cast.

In an interview on the Today show, Jo Koy expressed his excitement on being able to represent the Filipinos on the big screen.

"There is a lot of pressure. I got the weight of that country right now so I made sure that I represented everyone beautifully, especially my mom too. It's just beautiful," he said.

Jo Koy added that he is elated for his Filipina mother Josie, who, for the first time, will see a film as such in Hollywood.

"My mom will be 69 and it's been 51 years since she lived here and never seen anything like this and this is the first time that her and everybody else that's Filipino being represented this way," he stated.

Jo Koy shared that his son Joseph had already watched Easter Sunday during the film's premier night. When asked what was his son's reaction to the movie, he answered: "He cried. We both did. It was a big moment."

In a separate interview, Jo Koy said he also hopes that the movie will be a source of pride for the new generation of immigrants with Filipino roots.

"Before there was the internet, I was just looking for my own identity and try to find my voice and I saw Tia (Carrere) come on the screen. I was like 'She looks like my cousin.' And I couldn't even watch the movie anymore. I wait till the credits and then I see Carrere, I knew she's Filipino and that's what it meant to me," Jo Koy shared in his interview on The View.

He continued: “What this movie means to the generation now, it's like it's gonna be next level. It's like, 'That's my family, that's what we sound like, and that's how we eat and we're just like you.'"

Steven Spielberg is one of the producers of the film.

In an interview with Entertainment Weekly back in May, Jo Koy shared how Steven became a producer of the film.

"He just loved the stories about my mom and our relationship… He just enjoyed that dynamic, and he enjoyed the storytelling, and he was like, 'I want to make this story a reality.' And it's not about making fun of Filipinos. It's about a family first that just happens to be Filipino," Jo Koy shared.

"And you're going to relate to it. No matter what ethnicity you are, a mom is a mom. They all do the same mom stuff," the Fil-Am comedian added.