Markus Paterson on his sacrifices after becoming a father at 22: ‘My life flipped upside down talaga’ 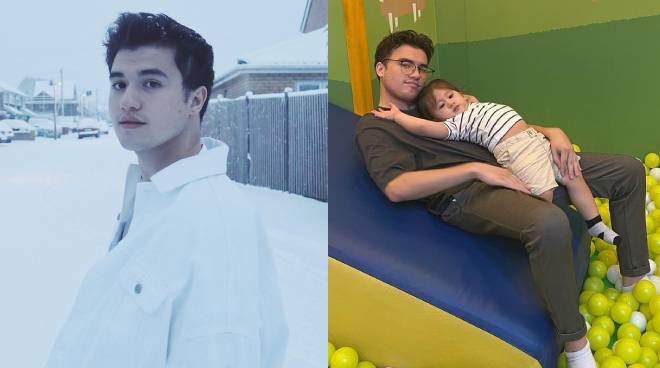 After becoming a father to his son Jude Trevor with actress Janella Salvador in 2020, Markus Paterson revealed how his life changed and what sacrifices he had to do for his son.

“Becoming a father at 22, 23, I guess you could say I sacrificed all the necessary sacrifices. Lahat ng mga bisyo, everything that 22, 23-years old do. Guys, we go out, we party. Lahat ng mga ganung sakripisyo na kinailangan talaga and it wasn’t even a hard thing to do. All the necessary sacrifices of becoming a young father, I embraced,” he shared during the Maalaala Mo Kaya mediacon.

The 24-year-old Fil-British actor admitted he had no regrets becoming a parent at an early age.

“Worth it definitely. As soon as I saw him in that delivery room, my life flipped upside down talaga. No regrets,” he added.

In his MMK episode Strangers Online, Markus plays the role of a man who falls for a woman he met online (played by Heaven Peralejo). In real life, Markus said he still believes in the importance of courting someone in person than in the virtual world.

“Yes naniniwala naman ako kasi it’s more of a cultural thing especially here in the Philippines. And since lumaki ako sa UK, it’s not really part of our culture so parang nagulat din ako with the whole process. But it’s nice to learn since Pilipino din naman ako. It’s nice to learn the culture here. I haven’t brought that up for certain reasons (laughs),” he revealed.

When it comes to courting women, Markus revealed that he does not believe in trying to look perfect.

“Madaming factors din yan eh. It’s not about putting your best foot forward, it’s about being true to yourself and making sure you’re showing all of your true colors. Because the worst thing, and I’m talking from experience, is getting into the relationship and nag-iiba bigla yung tao. Parang they’re not putting their best foot forward, they’re just putting their foot forward where they think they would like them more because they think being someone else and not their true selves. I think it’s just being more honest with yourself and that’s it pretty much,” he explained.

Catch Heaven Peralejo, Markus Paterson, Paolo Gumabao, and Nonie Buencamino this August in MMK, airing/streaming every Saturday on A2Z, Kapamilya Channel, Kapamilya Online Live on YouTube, ABS-CBN Entertainment Facebook page, and iWantTFC. Outside the Philippines, it is available on cable and IPTV via The Filipino Channel. #MMK