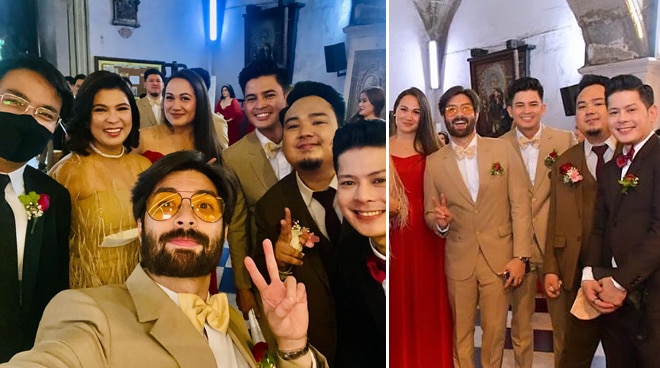 It’s been more than 18 years since ABS-CBN first launched its reality-based talent search called Star Circle Quest (SCQ) which produced two seasons. For its first batch, ten talented hopefuls bested thousands of auditionees to make it to the Magic Circle of 10 which ultimately announced Hero Angeles as the show’s first Grand Questor.

Last August 28, some SCQ alumni were able to have a mini-reunion because of Raphael Martinez’s wedding to non-showbiz girlfriend and hair and makeup artist Lovely Terrado. Melissa Ricks shared snapshots of herself with Joross Gamboa and Joseph Bitangcol after the ceremony which was followed by the reception at the Diamond Hotel in Manila. Other SCQ members in their batch aside from Hero included Sandara Park, Roxanne Guinoo, Neri Naig, Errol Abalayan, and Michelle Madrigal. Other celebrity guests included Bong Revilla, director Edgar Mortiz, Randy Santiago, and Jinggoy Estrada who served as godfathers to the couple. Other celebrities spotted at the wedding included Jason Abalos (who was part of the groomsmen), Arlene Muhlach, and singer Luke Mijares.