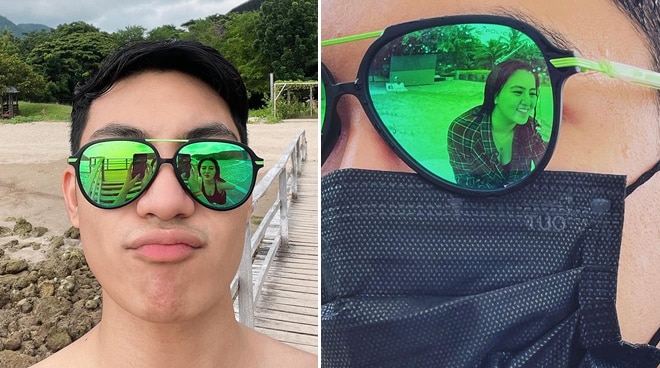 Although Darren Espanto recently admitted in an interview last month that he was currently single and happy, it looks like the 21-year-old singer and actor may have a new update in his life after posting photos from a recent beach trip last weekend on his Instagram account.

Darren, who surprised his fans with a more mature image earlier this year when he posted photos from a pictorial on his 21st birthday, showed off his fit physique in some topless photos taken at a beach in Nasugbu, Batangas. He wrote the caption, “Throwin’ out the shade for a little bit of sunshine.”

What was not indicated in the caption but seen in the last photo was the image of Carmina Villarroel and Zoren Legaspi’s daughter Cassy reflected on Darren’s sunglasses.

Cassy also posted some of her beach photos with the caption “in the moment” with a close up shot of Darren’s sunglasses showing her reflection. The two celebrities received tons of comments from friends and fans about posting identical photos.

Darren has constantly maintained that Cassy is one of his closest friends in the industry, along with AC Bonifacio who is his co-star in the iWantTV musical series Lyric and Beat.