Check out the full list of winners at the 2022 VMAs. 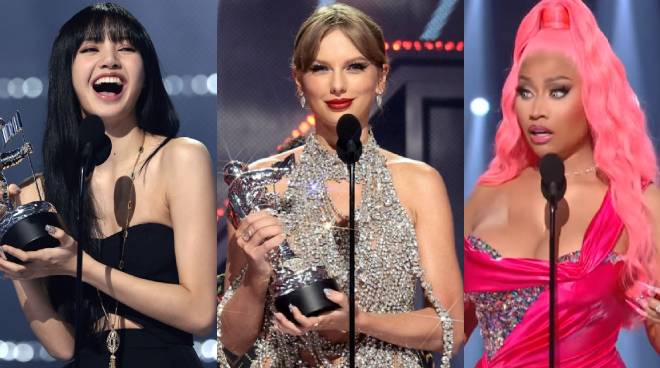 The biggest artists in the world gathered on Monday, August 29 (Philippine time) at the Prudential Center in Newark, New Jersey for the 2022 MTV Music Video Awards.

Taylor Swift took home the Video of the Year award, the highest honor at the awards ceremony, for "All Too Well (10 Minute Version) (Taylor's Version)."

We all just witnessed a HISTORIC third win for Video Of The Year at the #VMAs for @taylorswift13 😭 CONGRATS, TAYLOR!!! pic.twitter.com/qtbqLcDLV8

In the same speech, Taylor also announced that she will be releasing a brand new album this coming October.

"I had sort of made up my mind that if you are going to be this generous and give us this, I thought it might be a fun moment to tell you that my brand new album comes out October 21st," she revealed.

The singer then announced on social media that she will be releasing her new album Midnights this October.

Aside from Video of the Year, Taylor also bagged the Best Longform Video award and the Best Direction award for the same song.

Taylor is the first artist in the VMAs history to be awarded three Video of the Year awards.

It was also a big night for Nicki Minaj who brought home the Michael Jackson Video Vanguard award. She also bagged the Best Hip-Hop award for her song "Do We Have A Problem" featuring Lil Baby.

Earlier that night, BLACKPINK snagged the Best Metaverse Performance for their virtual performance in PUBG.

It was also a big night for Harry Styles who won Album of the Year for Harry's House. He also bagged the Best Pop and Best Cinematography for awards for his song "As It Was."

Video of the Year: Taylor Swift - All Too Well (10 Minute Version) (Taylor’s Version)

Artist of the Year: Bad Bunny

Best Hip-Hop: Nicki Minaj Featuring Lil Baby - Do We Have A Problem?

Push Performance of the Year: December 2021: Seventeen - Rock With You

Best Alternative: Måneskin - I Wanna Be Your Slave

Song of the Year: Billie Eilish - Happier Than Ever

Best Pop: Harry Styles - As It Was

Best R&B: The Weeknd - Out Of Time

Cinematography: Harry Styles – “As It Was”