First-time mom Angelica Panganiban gave her followers an inside look of her baby’s nursery room. 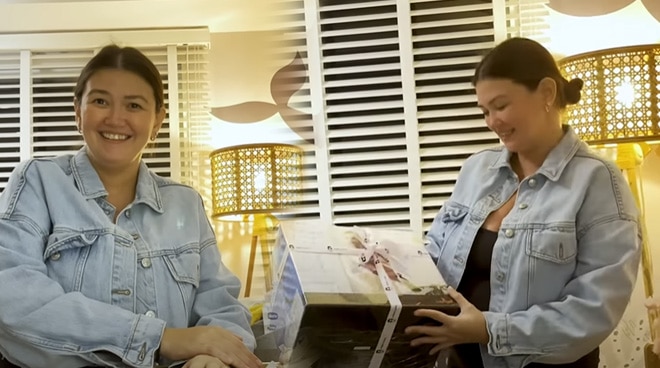 Actress Angelica Panganiban gave a glimpse of her baby’s nursery room on her and partner Greg Homan’s YouTube channel, The Homans, last August 27. The first-time mom shared interesting details – including the tiniest ones – that went into the successful creation of the nursery room.

In the vlog, the Kapamilya star proudly showed off the gifts that were given to her baby by her close friends during the baby shower.

Although there are only a few weeks left until her baby comes out, Angelica admitted that the nursery room is still not a hundred percent finished as she’s still not fully happy with the outcome.

She jokingly shared that she’ll be putting in an “alcohol station” before entering the nursery room itself. The actress joked that the alcohol station would be filled with alcoholic drinks instead of the usual sanitary alcohol.

The nursery room was designed to look like the room was underwater. Some of the elements incorporated in the design including the wallpaper and the jellyfish pieces ––which were all bought from Instagram –– made the nursery room look like it was under the sea.

Angelica proudly shared that most of the items that are in the nursery room were locally made––from the crib up to the wallpaper. The actress-entertainer also shared that her baby now has clothes ready up until she turns a year old.

She shared that she and Greg Homan plan to stay in Manila for the rest of her pregnancy journey and will return to Subic once she gives birth. As for the nursery room, Angelica wants it prepared already which is why she pushed to finish the room prior to leaving for Manila.

It was late in March when the actress announced that she is pregnant with her first child. She met her partner while she was taping for her teleserye, Walang Hanggang Paalam, back in 2020.