The sweetness of Edu Manzano and Cherry Pie Picache was too much for Alora Sasam. 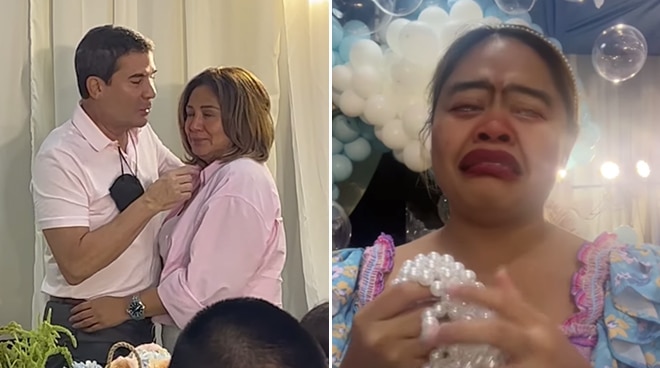 Comedian-actress Alora Sasam posted on her Instagram her reaction to Edu Manzano and Cherry Pie Picache kissing in front of everyone. In the video, friends of the couple were urging the two to show them a little kiss which Edu obliged.

It wasn’t just once, but twice that Edu and Cherry Pie kissed in the video and the audience cheered them on. Towards the end of the video, Alora was seen counting the pearls in her necklace while the crying filter was on.

Netizens couldn’t help but laugh at the wittiness of the comedian. Friends of Alora such as Arlene Muhlach and Joj Agpangan commented with laughing emojis on her post.

Edu and Cherry Pie have yet to react to her post.

In a previous vlog, the two have been open about having a baby in the future. Cherry Pie has been vocal as she would want her child, Nio, to have a younger sibling.

It was back in November 2021 when Edu and Cherry Pie first revealed their romantic relationship. The two shared that their romance rekindled while they were working on the series Marry Me, Marry You wherein they play a married couple.