Paolo Gumabao on his first ‘Maalaala Mo Kaya’ role: ‘It was one of the most challenging things I had to do’ 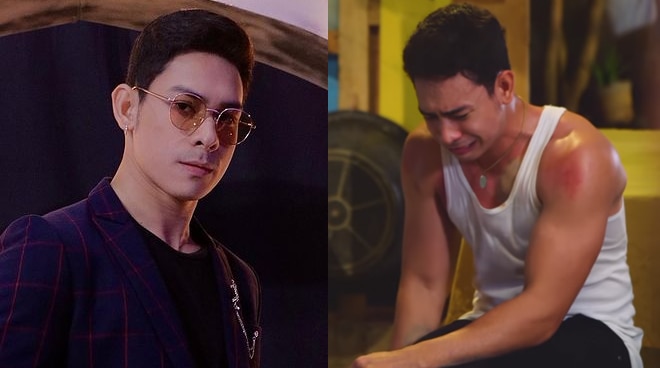 Having done a variety of roles in his almost eight years in showbiz, actor Paolo Gumabao said he considered it a big opportunity to finally star in his first episode for Maalaala Mo Kaya (MMK).

“It feels great. It’s weird kasi pag kinukuwento ko sa mga tao kinikilabutan ako sa totoo lang. I’ve dreamt about this episode for a long, long time. Dati ko pang pinapangarap na makagawa ng MMK episode and yes it was one of the most challenging things I had to do ever since. Kasi I got the script a few days before and grabe pala ang taping ng MMK, two days lang. One episode is crammed into two days of taping so grabe yung kailangan mo i-memorize. And of course bukod sa pag-memorize mo ng lines, you have to be emotionally prepared for kung ano yung kailangan mo ibigay sa character na yun,” he said.

READ: Paolo Gumabao on doing daring roles: ‘I’m being pushed outside of my comfort zone’

For his role in MMK, Paolo shared how he was able to relate to his character.

“I play the role of Jason and si Jason lumaki siya na beki. The person that played my mom is Carla Guevarra. The story is as a beki kid I looked up to my mom more kasi my dad here si tito Nonie (Buencamino) is a basurero. So growing up, I did not really like or appreciate what my dad does for a living. I’m ashamed of him. I can relate to Jason in a way na ako kasi mahal na mahal ko yung papa ko. I grew up with my stepfather. He raised me since I was born and grabe yung pag-appreciate yung ginawa niyang yun kasi hindi madali yun eh. Yung tatanggapin mo yung isang bata ng taong mahal mo na hindi naman sa ‘yo. So grabe yung love ko for my dad because of that,” he explained.

Playing the role of his father in the drama anthology is veteran actor Nonie Buencamino.

“Si tito Nonie nakatrabaho ko actually sa last show I did which is Huwag Kang Mangamba and at that time, si tito Nonie every time na may tanong ako about my character I would ask him and he was very accommodating, tinulungan niya talaga ako step by step on how to attack the scenes that I was asking him about.

After working on his episode, Paolo said he was content with his performance.

Paolo also explained why he treasured his experience taping for MMK.

“Yung learning experience because grabe yung mga natutunan ko sa two days na taping namin and this is not like the usual. When it comes to for example, memorizing lines. Because before I went into the lock-in for MMK, kakalabas ko lang ng Darna lock-in taping. So pagpasok ko sa MMK we had 20 sequences to shoot in one day so that’s a lot. Bale grabe yung when you push your brain to its limits, napansin ko after those two days of taping bumilis yung pag-memorize ko ng lines. Kasi parang winorkout mo yung utak mo dun sa taping. It was a learning experience not only from your director and co-actors pero may learning experience na internal din,” he said.

Aside from MMK, Paolo is also part of the cast of ABS-CBN’s latest fantaserye Darna.

Catch Paolo Gumabao and Nonie Buencamino in MMK this month. MMK airs/streams every Saturday on A2Z, Kapamilya Channel, Kapamilya Online Live on YouTube, ABS-CBN Entertainment Facebook page, and iWantTFC. Outside the Philippines, it is available on cable and IPTV via The Filipino Channel. #MMK