Kapamilya actress Lovi Poe was featured on the cover of LA-based magazine ‘Fault’ for its August 2022 issue. 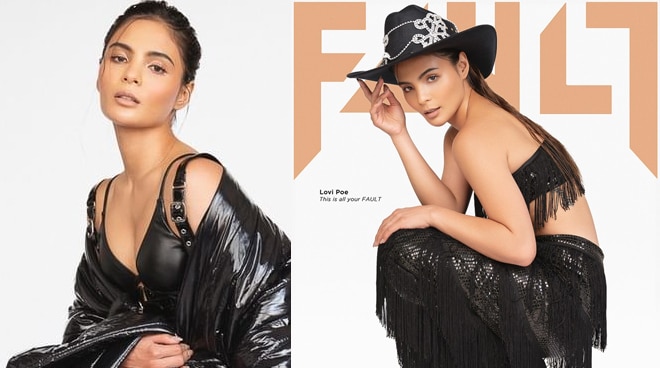 Kapamilya actress Lovi Poe continues to make waves as she is featured on the cover of LA-based magazine FAULT for its latest issue.

Lovi, 33, looked stunning in the cowgirl-inspired shoot as seen in photos released by the magazine on Instagram.

"What a fun shoot with a fun crew! Here’s to taking risks and stepping out of the norm. And I know we hear this often, but let’s go bigger and reach greater heights, yeah? Can I get a yee-haw?" wrote Lovi in her own Instagram post.

In her profile for FAULT, Lovi talked about her acting process and journey, as well as her venture into film production with the launch of her own company, C'est Lovi Productions.

"I just want to be able to give back to the industry that my Dad was part of and that I’m part of and bring Filipino representation international. That’s the goal for me," Lovi, the daughter of film icon Fernando Poe, Jr., said.

"My Dad did have FPJ productions and it was huge back in the day. I think it would be nice to continue his legacy and be able to push it further in support of my fellow Filipinos back home. Hopefully, my dad from wherever he is will guide me through every step of the way."

Lovi currently stars in the iWantTFC series Sleep With Me and in the hit ABS-CBN drama Flower of Evil.

She is also set to appear in the US film The Chelsea Cowboy, alongside Hollywood actors Alex Pettyfer, Poppy Delevingne, and Charlotte Hope.