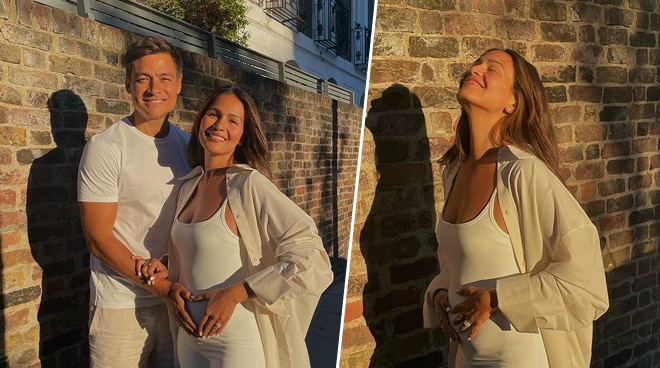 These were the words of Iza Calzado as she described her pregnancy journey.

The actress announced recently that she is pregnant at 40 years old.

In an interview with Cinema One, Iza shared how she and her husband Ben Wintle found out about her pregnancy.

"I was just in shock because I missed my period and I am super regular and I took a pregnancy test on a Sunday night and I knew. And then kami ni Ben we were in shock. We were not trying. This was unplanned but of course very highly appreciated," she relayed.

The Darna star admitted that they are still processing their new reality.

"It took us a week, we were still processing. Until now, it is three months na and first trimester is done. Not a lot of nausea. There was nausea but no vomiting. I’m so grateful that I’ve been able to do the things that I’ve been doing like working out but of course I have to scale down," she said.

Iza shared that pregnancy is humbling as she needs to embrace the many changes in her body and in her routine.

"It’s so humbling na you’re so used to this kind of energy level and then suddenly it's here and nako 'yung weight gain. I’ve just gotten to a point na after the Darna training na I was just eating and Ben was like are you eating enough? I was getting thinner and thinner," she shared.

Iza continued: "For the first time in my life I wasn’t starving myself or on this crash diet. I found my flow and I was at my leanest and suddenly you’re like putting on weight again and sabi heto na naman tayo sa body love. Ibang level ‘to ng surrender."

She also said that she is now putting a cap on how much she can push her body when working out.

"I was also mindful na not to push my body too much because I am very well aware that this could be a difficult pregnancy and again babalik ako sa gratitude kasi sobrang grateful ko na in-allow ako ng katawan ko, ng Panginoon, ng aking baby abundance to do the things that I’ve been doing," she said.

It was on August 12 when Iza revealed via social media that she is pregnant.

"They say life begins at 40. So I had all these big plans for my for 40th year on Earth as it also coincides with my 20th year in the industry. I already completed a few of the exciting projects lined up for me and there were a few dream projects in the pipeline. I was ready to usher in this new chapter in my life. Then you came along. Unexpectedly. You may not have been in my immediate plans but I instinctively knew that this was THE plan," she shared in her pregnancy announcement on Instagram.

Iza said it is the most beautiful birthday gift she has received.

"They were right. Life does begin at 40. Simply put, your life begins as your mother turns forty. To know that life is growing inside me is a great miracle. You are my miracle. You are my guiding light. Thank You, Lord, for the most beautiful birthday gift. Our abundance," she stated.