Breakout loveteam Donny Pangilinan and Belle Mariano are set to bring “kilig” to their fans with their newest film, “An Inconvenient Love.” 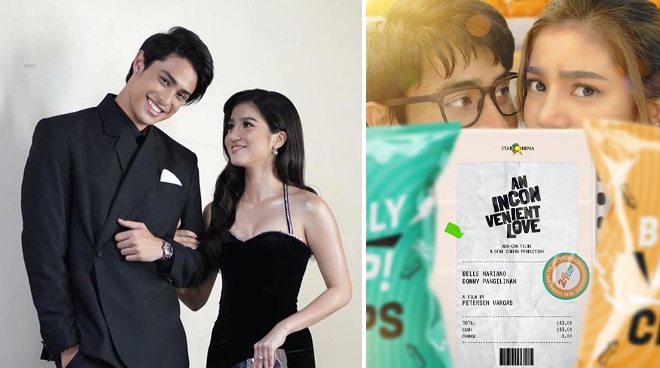 Breakout loveteam Donny Pangilinan and Belle Mariano are set to bring "kilig" to their fans with their newest film "An Inconvenient Love."

On Instagram, producer Star Cinema shared a teaser poster for the movie to be directed by Petersen Vargas, who is best known for the acclaimed film 2 Cool 2 Be 4gotten and the hit BL series Hello Stranger.

"Should love always be QUICK, EASY and CONVENIENT? Watchuthink?"

Both Donny and Belle also shared the teaser poster for the film on their respective Instagram pages.

"Are you guys ready? IN CINEMAS SOON," wrote Belle.

An Inconvenient Love marks the onscreen couple's second film after Love Is Color Blind, which set a record as the highest-grossing local movie of 2021.

Also produced by Star Cinema, it became the overall No. 1 film when it debuted on Netflix Philippines early this year.

Donny and Belle recently wrapped up the second season of their popular series "He's Into Her", for which their tandem, dubbed as "DonBelle", was hailed as the "new-gen phenomenal love team."

Currently, the two are in the United States as part of the Beyond the Stars: US Tour concert series of Star Magic.