NCT 127 is coming to Manila this September

Filipino NCTzens, are you ready? 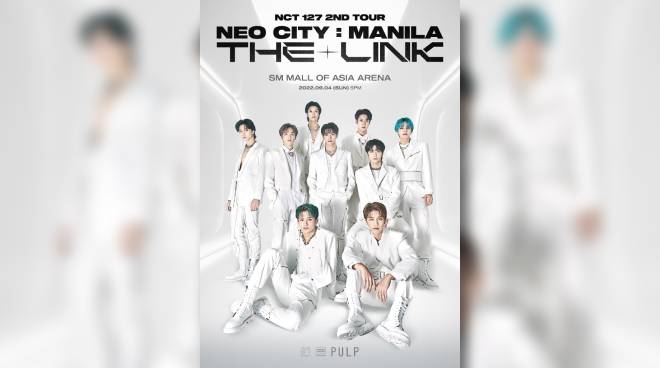 South Korean boy group NCT 127 will be coming to Manila on September 4 for their NEO CITY: MANILA - THE LINK concert. This was both confirmed by NCT 127’s entertainment agency, SM Entertainment, and concert organizer, PULP Live World on August 12.

The concert of the boy group is historic for Filipino NCTzens as this will be the first time for NCT 127 to hold their own concert. Previously, they shared the stage with different K-Pop acts when they performed in Manila.

The ticket selling for the South Korean boy group will start on August 21, 12 pm at all SM Ticket outlets nationwide and its online platform as well. Ticket prices for the concert range from PhP 3,000 to PhP 12,500. Filipino NCTzens were being teased weeks prior to the announcement about the boy group’s concert.

READ: NCT to release song with all 23 members

Back in 2017, NCT 127 performed for K-Pop Republic 2 alongside South Korean girl group Cosmic Girls. In 2019, they were part of the performers for the K-Pop World Music Festival. They were with their labelmates, Red Velvet, who recently performed in the country last month.

NCT 127 made its official debut back in 2016 with their single, “Firetruck”. They are the first official fixed subunit of NCT which consists of 23 members. Currently, they promote themselves as nine members as member Winwin is promoting in the other NCT subunit, WayV.

READ: SM Entertainment holds auditions for the next K-Pop idol — and it’s open to Filipinos, too

They are known for their hit songs such as “Punch”, “Cherry Bomb”, “Kick It”, and “Sticker” among others. The boy group already made its world tour prior to pandemic and has sold millions of copies of their albums worldwide.