Veteran actress Charo Santos took home an award from her role in the film “Kun Maupay Man It Panahon.” 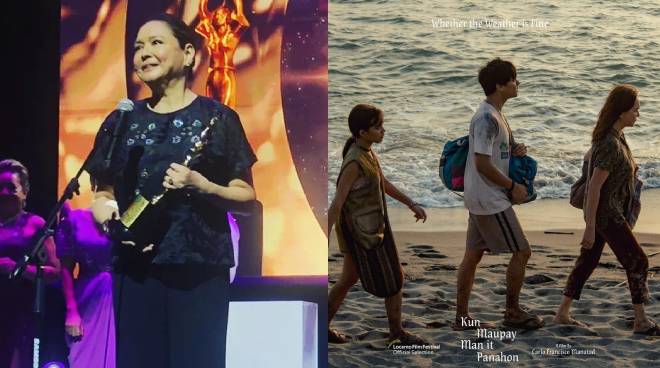 After bagging an award at the Locarno Film Festival in Switzerland last year, Charo Santos-Concio’s film Kun Maupay Man It Panahon (Whether the Weather is Fine) continues to reap accolades this year as it took home one of the biggest titles in the recent FAMAS awards where it garnered 12 nominations.

Last July 30, Charo shared her Best Actress win with her fellow cast members and crew in the production of the film which follows the story of Norma (Santos) her son Miguel (Padilla) and daughter Andrea (Rans Rifol) as they struggle in the aftermath of the typhoon Yolanda which devastated Tacloban City in 2013.

On her Instagram account, she wrote: “Maraming Salamat, FAMAS. Thank you @carlomanatad, @attyjoji, and entire production team. I share this honor with you my co-stars @supremo_dp, @__ransrifol, and the people of Tacloban. Sulit ang pag-aaral ko ng Waray!🥰”

One of the first to congratulate Charo with her win is co-star Daniel Padilla as well as other celebrities like Janine Gutierrez, Nikki Valdez, Korina Sanchez, Darla Sauler, and Alora Sasam.