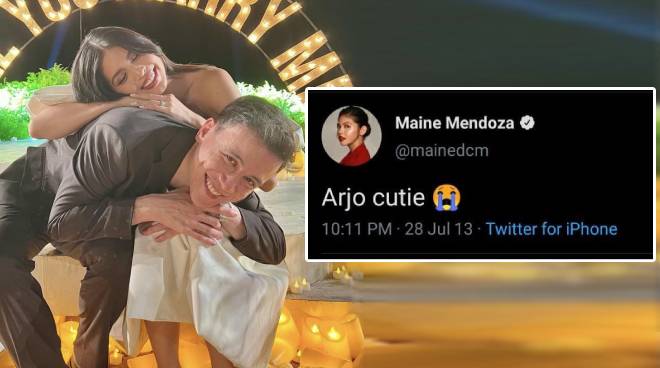 After announcing she and Arjo Atayde are now engaged, an old tweet of Maine Mendoza’s trended all over social media last night, July 29. It was exactly nine years ago when the actress was fangirling over her now fiancé Arjo and posted “Arjo cutie” on her Twitter account on July 28, 2013.

July 28 is a special day for the couple as three events occurred on this date. The first one was when Maine posted her viral tweet. The second one was back in 2018, when the couple first met each other. Finally, July 28 was when Arjo proposed to Maine.

Twitter netizens were the first ones to notice the old tweet of the TV personality and connected the dots as to why Arjo decided to propose to her on that exact date. Netizens claimed that the universe heard the manifestation of Maine and made sure to make the stars align.

“Your love story is magical,” a netizen named @MsM1995 tweeted to the actress.

“From arjo cutie to this??? The power of manifestation grabe,” Twitter user @dumploop24 tweeted.

Meanwhile, on her Instagram stories, Maine reposted her old tweet with the caption, “Started from the bottom now we’re here.”

Arjo and Maine announced that they were exclusively dating back in January 2019 and confirmed that they were in a romantic relationship 11 months after. Arjo has previously mentioned that Maine was “the one” for him and he sees no other marriage partner but her.

Celebrities have congratulated the two on their engagement in the comment section of their posts.