‘Sleep With Me’ is set to air on August 15 on iWantTFC. 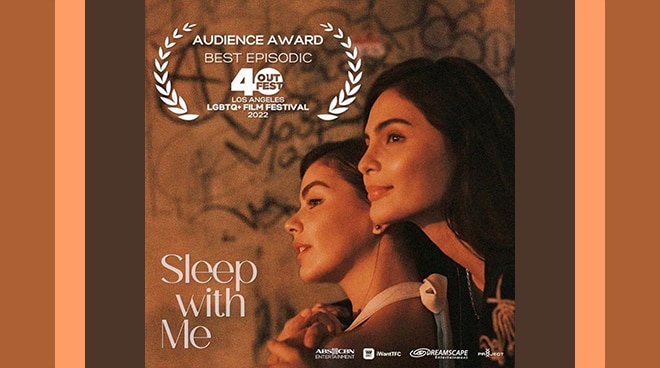 Samantha Lee’s series, Sleep With Me, won the Audience Choice Award for Best Episodic at the recently concluded 2022 Outfest LGBTQ+ film festival in Los Angeles, California. Lead actress Lovi Poe took to Instagram to show appreciation for the team behind the series.

“Couldn’t be prouder of Team #SleepWithMe for this Audience Choice Award for Best Episodic in the recent @outfest awards! ♥️ Congratulations to our girl on fire @givemesam! 🔥 Can’t wait for our series to show on August 15. Manila, mark your calendars: full trailer on August 1! 🎬,” she wrote.

Meanwhile, the director herself couldn’t believe she took home her second award from Outfest.

The series’ win comes ahead of its premiere on iWantTFC which is set to air on August 15. Sleep With Me was co-produced by Dreamscape Entertainment and Project 8 Projects.

WATCH: Lovi Poe, Janine Gutierrez in ‘Sleep With Me’ teaser

Sleep With Me was written and directed by Samantha herself. She has produced several LGBTQ+ themed films such as Baka Bukas and Billie and Emma. The series revolves around the story of an interabled couple: a radio DJ who needs a wheelchair and a girl who suffers from sleep disorder.

In her previous Instagram post, Lovi shared how excited and happy she was to be part of this project.

“​​This series we recently shot holds a special place in my heart because I had to yet again break from my usual mold as an actor. I am really happy I did this with a team that was so game and easy going. I’m so proud of this series,” she previously shared.