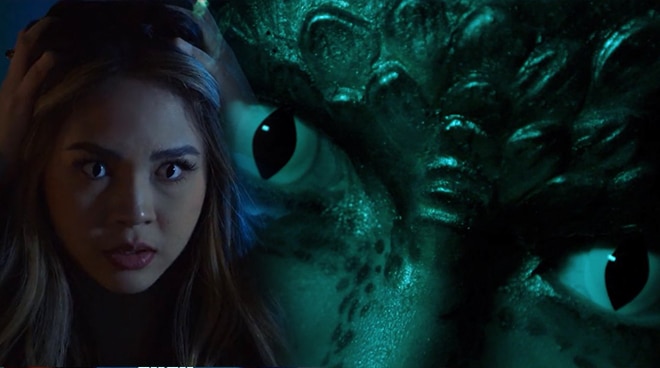 The latest teaser for Darna is finally here – and it gave fans a look at Darna’s nemesis Valentina played by Janella Salvador!

Fans finally got a glimpse of how Janella Salvador looked like donning the iconic snake hair of Valentina. Of course, they couldn’t hold their excitement about how Janella will be able to portray the iconic role that has been passed down from one generation to another.


On Twitter, Valentina became one of the top trending topics in the country soon after the trailer dropped. The teaser easily garnered at least 10,000 tweets and instantly became the talk of the town.

On Facebook, netizens flooded the comments section of the trailer with a lot of them sharing how excited they are to see Jane De Leon and Janella dueling it out as Darna and Valentina, respectively.

Valentina was seen in the teaser with her shadow cast on the wall alongside her snake-hair.

“Janella Salvador, this generation’s Valentina, will surely deliver. She’ll eat this role, like a snake that she is. So excited for Darna, and for what’s coming ahead,” Twitter user @starvador tweeted.

There have been no sightings of Jane’s full transformation as Darna just yet, bringing even more excitement among fans to see their idol in full Darna costume.

READ: Janella Salvador mourns the death of her dog Max: ‘I lost a partner in life’

Meanwhile, Darna is set to air on August 15 on Kapamilya Channel, A2Z, TV5, iWantTFC, TFC, Kapamilya Online Live, and Jeepney TV. One of the most acclaimed filmmakers in the industry, Chito Roño takes on the directorial seat with Avel E. Sunpongco and Benedict Mique joining him at the helm.