Is a collab coming? Liza Soberano and James Reid spotted with GOT7’s BamBam in Korea.

Liza Soberano and James Reid were spotted with GOT7's BamBam in Korea. 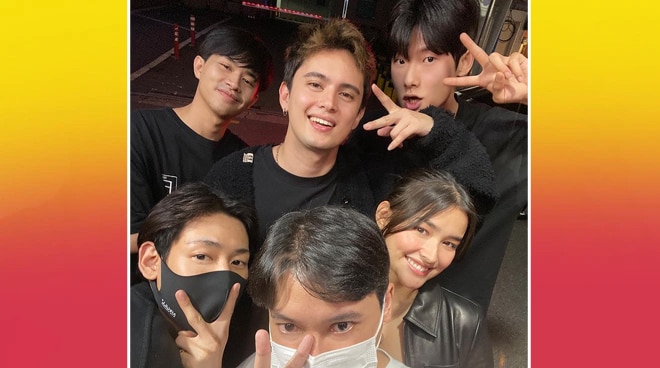 The online world went abuzz recently after Liza Soberano and James Reid were spotted with GOT7's BamBam in Korea.

Mark Mariano of Aria Group International posted a snapshot of himself alongside the three artists alongside two other companies.

Netizens were quick to react to the group photo.

"Half of Asian brightest stars unified. Love when all favourites from across Asia get together," one netizen commented.

"As a PH Ahgase, I am so amazed and so excited for this collab!!" another netizen said.

Back in June, Liza signed a contract with James's talent agency Careless Music. She has been exploring opportunities abroad since signing with the agency.

During her contract signing with the agency, Liza shared why she decided to sign with Careless.

The actress added, "I also wanted to work with people my age to be honest... and when I met James and his team it really made me even more excited to work with because their team is so young, so creative and they are so fearless to take risks and try to chase after things that we would think is impossible."

Meanwhile, James released his first international collaboration back in March.

The Filipino-Australian artist released the remix of his single "Hello" titled "Hello 2.0 Legends Only" in collaboration with GOT 7's Jay B and with Taiwanese-American rapper ØZI.