BTS and Snoop Dogg set to release collaboration next month

After months of waiting, ARMYs can finally enjoy the collaboration. 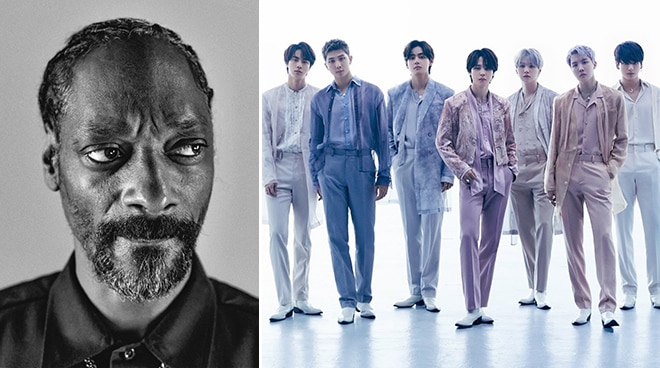 Korean boy group BTS and American rapper Snoop Dogg will be collaborating on new music for their fans to enjoy. This was confirmed by the American music producer Benny Blanco on his Twitter account.

“u guys ready to make some bad decisions,” Benny wrote.

In his tweet, the art reveal for the collaboration will be released on July 23, at 12 am Korean Standard Time (KST). Meanwhile, the first and second music video trailers are slated to be posted on August 3 and August 4, 12 am KST, respectively.

READ: J-Hope on releasing his first solo album ‘Jack in the Box’: ‘I really poured everything into this album’

The music video for their song, “Bad Decisions”, will be released on August 5, at 1 pm KST. Alongside their official music video, the American music producer also announced the release of the lyric video, visualizer, and BTS recording sketch in the days that will follow.

Fans of the two artists couldn’t hold back their excitement as they’ve been waiting for this collaboration. It was early this year when Snoop Dogg announced and confirmed that there will be a collaboration between him and the Korean superstars.

Last July 20, the official Twitter account of BTS dropped a major hint that the collaboration will be pushing through. In their tweet, Benny jokingly asked the boy group if he could be the eighth member of the boy group. However, BTS declined his offer but proposed to have a collaboration to make “the best song in the entire world.”

Quickly after posting that, they announced the much awaited partnership between them and Snoop Dogg.

Recently, J-Hope released his first solo album, Jack in the Box. The group is currently on a hiatus following their announcement last month.