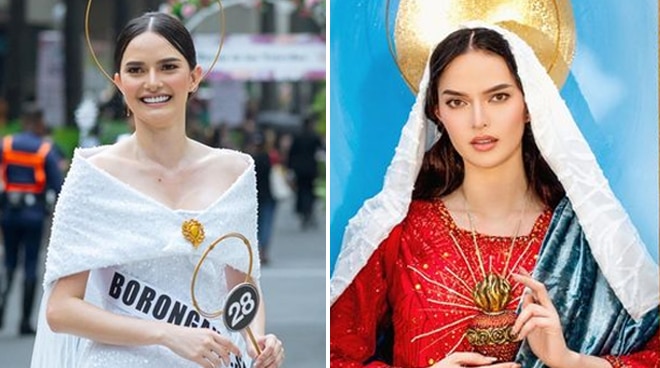 As Binibining Pilipinas’s much-anticipated National Costume presentation draws near, another pageant hopeful’s look has gotten media attention for its interesting and unique inspiration. Last July 15, Gabrielle Camille Basiano, the candidate from Borongan City, Eastern Samar, could be seen dressed as the Virgin Mary.

On the official pageant Instagram page, they wrote, “Revered for her humility and motherly love, the Virgin Mary is the ultimate symbol of a WOMAN! An homage to Padul-Ong Festival, a mythical presentation that unfolds the story on how the image of the Virgin Mary was mysteriously transported from Portugal to Borongan, Eastern Samar, celebrated every September 8 of the year.”

Gabrielle’s gown was designed by Ken Batino and Jevin Salaysay.

Earlier this year, Gabrielle wore another holy-themed gown during the Bb Pilipinas Santacruzan parade at the Araneta Center in Cubao. Gabby, who was born in Borongan, Eastern Samar, first competed in Binibining Pilipinas last year when she was 26 years old and took home the Best in Long Gown and won first runner-up in the competition.

Watch the Binibining Pilipinas National Costume Presentation on July 16, 2022 at The New Frontier Theater at 3 pm. The 2022 Binibining Pilipinas Coronation Night will be held on July 31 at the Smart Araneta Coliseum in Quezon City and will be hosted by Miss Universe 2018 Catriona Gray along with former Miss Grand International Philippines 2016 Nicole Cordoves.