‘It’s Showtime’ judge Ruffa Gutierrez shares more details about sending her daughters off to Istanbul to visit their father after 15 years. 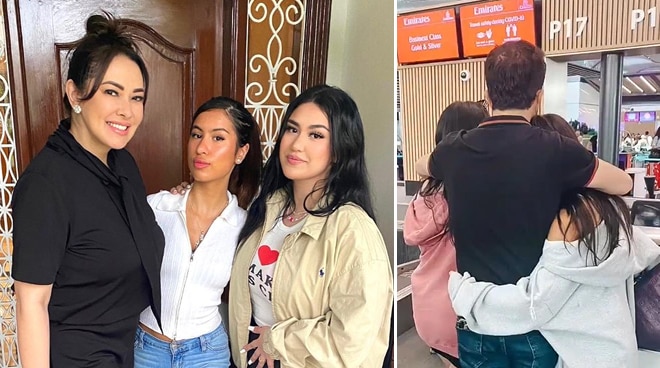 Last month, Ruffa Gutierrez sent her daughters Lorin and Venice off to the airport to fly to Istanbul, Turkey, where their father, businessman Yilmaz Bektas, is based. Ruffa, who separated from Yilmaz in 2007, revealed in a recent interview on Dr. Vicki Belo’s vlog why it took so long for her to allow them to go.

“They haven’t seen their dad since we left Istanbul, this was way back in 2007. He came to visit one time but since then, the kids never saw him. Hindi naman sa binawalan pero I just told Yilmaz that, ‘If you want to see your kids, come and visit them in the Philippines. Or we’ll meet in a neutral country like the United States, Europe, anywhere, pero huwag muna sa Turkey.’

“You can’t blame me. I guess at that point in my life, I was very afraid. I was scared because of what happened sa paghihwalay namin and hindi mo ako ma-be-blame kasi siyempre gusto ko naman na maging safe ako, maging safe yung mga bata. But I didn’t realize that it’s been 15 years and feeling ko yung mga bata, dala dala nila yung pain na yun, not being able to see their dad. They grew up without a dad. Even if my dad is there, it’s really different. They feel like they’ve been abandoned,” she admitted.

Even though she and her ex-husband had been in touch, Ruffa said it was not easy planning the trip.

“This reunion is three years in the making. Every time we would try and set something up, we would end up fighting over the phone. He was supposed to come to the Philippines. Kung anu-ano lang. ‘Yung nagkakainitan kami. We didn’t talk for over a year and then this Holy Week, Yilmaz had a dream about Venice and he said, ‘Is Venice okay? I feel like she’s going through a lot and I don’t understand why I had a dream about her.’ So nag-usap sila.

“This was in April for Holy Week and we were in Boracay. So I was there when they initially had a conversation. It was on speaker phone. Lahat ng hinanakit ni Venice linabas niya talaga and she cried. She felt very angry and once her bubba said hello, she just started crying and I know this is very personal for Venice and it’s very private. Pinagsabihan na ako ng mga bata na, ‘Mom, we want to vlog about it. We want to be able to talk about it kasi we’re of age na.’ Tama nga naman because Lorin is 18 and Venice is 17. So they’ll also vlog about it,” she shared.

READ: Ruffa Gutierrez sends daughters off to Istanbul to meet their father

Ruffa’s eldest daughter Lorin is currently studying college in the US while her younger daughter Venice is set to enter college soon. But the celebrity mom shared that instead of having a grand debut, Venice would rather travel for her 18th birthday celebration.

“I’m so happy they reconnected. The pandemic was able to make us realize so many things. Na she would rather focus on experiences, memories, traveling than just spend so much on a party. I think the kids are like me in many ways. Like they’re malambing, they’re sweet, they’re so Pinoy na Pinoy. But at the same time, they have this tough exterior. Matapang sila sa labas pero malambot sila sa loob. That’s very much like me.

“I always teach the kids that you have to really choose someone to love that is God-fearing, if they’re close to their family, mahilig mag-aral, matalino, hindi tamad. Kasi at least pag hindi tamad, maabilidad. You can do so many things. Mahirap pag tamad. And I always tell them that they should study. Education is very important,” she said.

As a loving mom, Ruffa shared that aside from rebuilding their relationship with their father, she wants her daughters to grow up emotionally strong.