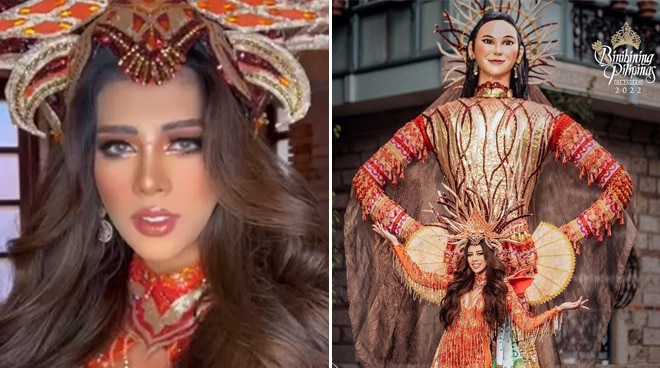 As the Binibining Pilipinas pageant’s national costume presentation day draws closer this weekend, contestant Herlene Budol revealed that her chosen costume took inspiration from her hometown Angono, Rizal’s annual Higantes festival. In her Instagram post last July 13, the vlogger-turned-beauty queen aspirant shared more details about her gown which is a body suit made mostly out of thousands of orange and gold crystals which embody Herlene’s initial nickname in showbiz, “Hipon Girl.”

She wrote, “3 DAYS before the much-anticipated Binibining Pilipinas National Costume. Angono, Rizal known as the “Art Capital of the Philippines’ and home of the 'HIGANTES Festival' —in celebration of the Feast of St. Clement.

“Higantes Festival (Festival of Giants) is being celebrated every 23rd day of November as a sign of thanks and prosperity to the Saint.

“In line with this celebration the HIGANTES FESTIVAL is also celebrated as it is believed in a Myth that there Giants who once walked over the land of Angono.

“Usually made of paper mache, bamboo, and aluminum, the higantes are originally 16 ft. in height and being danced during the parade.

“The costume represents the Festival and the image was taken from Miss Universe 2018 Catriona Gray as she once featured the province and the festivity during her competition.

“The painting is a history of the Province of Angono. Carefully and intricately hand crafted by one of Angono's best artists.”

READ: ‘Hipon Girl’ Herlene Budol on life after showbiz: ‘Back to zero kami’

Herlene’s costume was made by designer Patrick Isorena who also designed different looks for the Bb. Pilipinas finalist.

Herlene is one of the top 40 finalists who were chosen after more than a hundred applicants in the open auditions held earlier this year. The Binibining PIlipinas Coronation Night will be held on July 31 at the Araneta Coliseum in Cubao, Quezon City with Catriona Gray, Edward Barber, Nicole Cordoves, and Samantha Bernardo set as hosts of the pageant.