Lovi Poe, a fan of Regine Velasquez, shared a duet with the Asia’s Songbird. 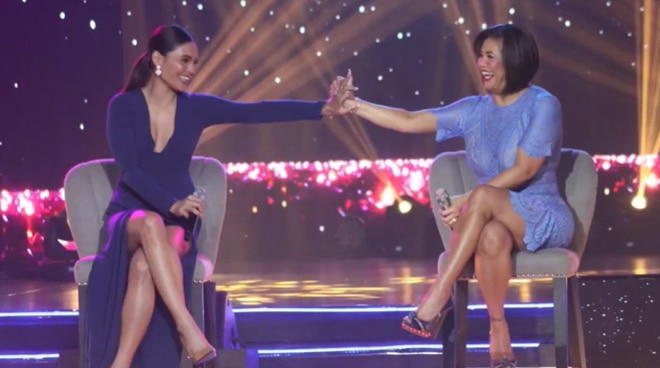 Flower of Evil star Lovi Poe made one of her childhood dreams come true in last Sunday’s ASAP Natin ‘To episode.

The Kapamilya star said she always wanted to have a duet with Asia’s Songbird Regine Velasquez ever since she was a kid.

After their performance which drew positive comments on social media, Lovi made sure to post it on her Instagram as proof to her younger self that they finally achieved one of their dreams.

“Young Lovi would have never thought this was possible. Sang You Were There and Bluer Than Blue with Asia’s songbird. Dreams come true, guys!! Thank you @reginevalcasid,” she shared.

The two performed Southern Sons’ “You Were There,” Michael Johnson’s “Bluer Than Blue,” and Regine’s very own “I Just Don’t Wanna Be Lonely.”

One of Lovi’s friends commented how she would have the songs of Regine played on her big radio back then. Lovi replied to her friend and agreed that it was indeed the big green radio that she used back then to play the hit songs of Regine.

In her previous interviews, the 33-year-old actress shared the passion she has for music. It was back in 2008 when she showcased her singing prowess by releasing her album called Bloom.

Lovi is currently the lead actress of the Filipino adaptation of the hit Korean drama series Flower of Evil. She plays the role of Iris, a police detective who investigates a murder case which is linked to the past of her husband Jacob, played by Piolo Pascual.

Meanwhile, Regine is part of the panel of judges in Idol Philippines Season 2 alongside Moira Dela Torre, Gary Valenciano, and Chito Miranda.