EXCLUSIVE: Ogie Alcasid on Paulo Avelino and Janine Gutierrez’s couple rumors: ‘They look like they are!’

Singer and actor Ogie Alcasid shares his experience going on his US concert tour with Paulo Avelino and Janine Gutierrez earlier this year. 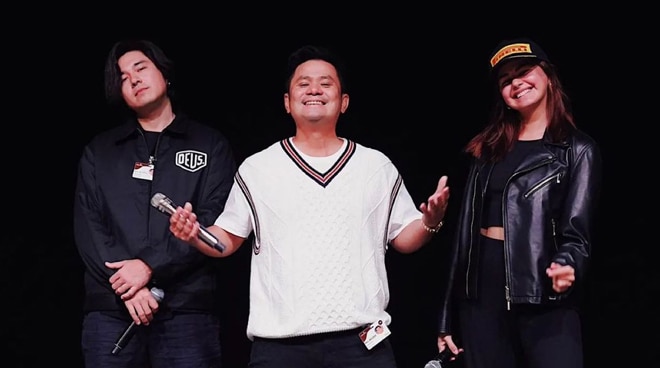 After his successful OA sa Love in the USA concert tour last March, Ogie Alcasid said he enjoyed sharing the stage with his special guests Paulo Avelino and Janine Gutierrez. The new love team were first paired together onscreen in the series Marry Me, Marry You and are also starring in the upcoming film Ngayon Kaya.

While touring the US with the rumored couple, Ogie shared his observations about Paulo and Janine in an exclusive interview with PUSH.

“You know those two, I love those guys. They’re complete pros. They’re very sweet to each other. I cannot say if they’re on or not. The truth is hindi ko alam. They look like they are! (laughs). For the second leg, they’ll be with me again. Masasabi ko na siguro kung talagang sila na (laughs),” he shared.

Aside from being a prolific singer and songwriter, Ogie also juggles his time managing his own talent management agency A Team as well as being a loving husband and father at home.

“It’s all about priorities. That’s why you have a good team behind you so that you don’t need to worry. Make sure that you have good and able people who are manning your businesses. As far as It’s Showtime and ASAP are concerned, nag-e-enjoy lang kasi ako talaga. It’s a blessing that I get to work everyday, that I get to work with my friends, sila Vice (Ganda), sila Vhong (Navarro), and of course sa ASAP naman sina Gary (Valenciano) and of course my wife. So I’m really, really having the time of my life. And I wish to spread that energy,” he admitted.

After signing up Ian Veneracion as his newest artist under his wing, the A Team founder and CEO revealed what kind of plans they have for him this year.

“Aside from the tours of Ian, marami kaming gagawing mga projects sa concerts and online shows. Marami kaming plans this year but a lot of it has to do with music. More music is going to be produced,” he said.

With his wife Regine Velasquez flying to the US soon for her own Iconic concert tour, Ogie shared that their family vacation will have to wait later this year.

“Regine has a tour in the US with Sharon (Cuneta). I might have a second leg of my tour so maybe in November we’re planning a short trip and then siyempre sa Pasko baka magbakasyon kami sa Balesin with the whole family. Yun lang. Nothing too fancy. Alam mo naman pabalik pa lang tayo sa normal eh. Although na-experience ko na yung paglipad sa States. Masarap eh,” he explained.

Playing for team Showtime during The Star Magic 30th All Star Games last May, Ogie entertained fans with funny antics inside the court as well.

“No, I’m not a basketball player (laughs). I just love the game. Nag-attend ako nung mga practice sessions and I play with the Showtime team and family with the cameramen. Mas golfer ako. So I joined a golf tournament a few weeks ago,” he added.