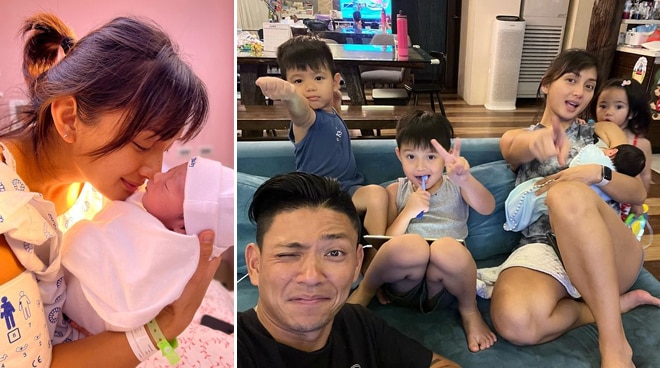 "And then, they were 4our," wrote Drew in the caption of his Instagram post, showing him with Iya, Astro, and their three other kids Primo, Leon, and Alana.

It was only last Saturday, June 4, when Iya and Drew welcomed Astro, their fourth child together.

In an earlier post, Iya recounted her recent birthing experience as her longest and most painful yet, but also the most special.

"Because I was praying for strength and courage every single day hoping to get through an unmedicated birth to wrap up this journey (Yes guys, I believe this is the last!)," she said.

"I was at  6cm and giving up when I asked for the drugs when all of a sudden God flipped a switch and I delivered 30-40 mins after!!!" she added. "He knew the desires of my heart and He opened my cervix up before the drugs came. What an experience. Thank you Lord!"

Iya and Drew have been married for eight years. They tied the knot in Nasugbu, Batangas in January 2014, after being in a relationship for 10 years.

Primo, their eldest child, is now five years old, while Leon, their second son, is three. Meanwhile, Alana, their only daughter, is turning two this July.