Sarah Geronimo had an “exemplary performance” at school, according to her teacher Heny Sison. 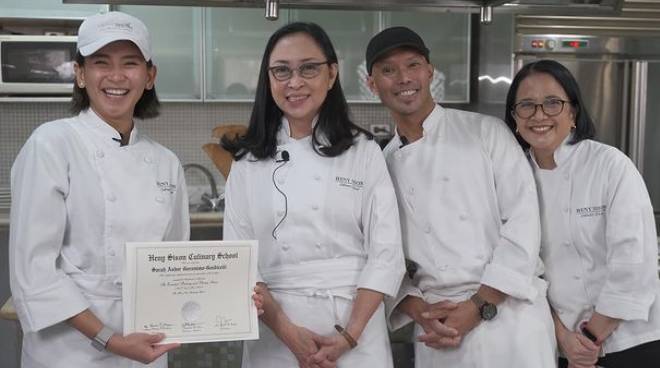 Without a doubt, Sarah Geronimo has unlocked an achievement worthy of the praises she’s been getting since her husband Matteo Guidicelli announced it to the world. Yep, she recently graduated from baking school, fulfilling her dreams of turning her passion into a profession.

But Sarah not only brought a #proudmoment to Matteo but also to her fans who have been watching her baking journey through the lens of her husband, creating culinary masterpieces such as cereal tres leches and strawberry shortcake.

But how exactly is Sarah as a student?

Heny Sison, the well-known pastry chef and founder of the Heny Sison Culinary School, described Sarah as “a very diligent, focused, passionate student” in an interview with ANCX.

Apparently, Sarah did not only get the nod of Heny Sison but her two other teachers Chef Juan Carlo Estagle and Chef Patty Loanzon as well.

Becoming a chef is something one has to work hard for — and Sarah has proven that she can make it by becoming a student with “exemplary performance at school.

“In [Sarah’s] case, Chef Carlo, one of the chefs who helped me in teaching Sarah, announced during the grad ceremony that yes, Sarah is now a Pastry Chef because of her exemplary performance in the class. Also, I agree with him,” Heny said.

Heny Sison said Sarah had one-on-one classes with her at their campus in Quezon City upon the request of the Popstar Royalty.