Jo Koy is set to return to the Philippines this August to bring his “Funny Is Funny” world tour to the country. 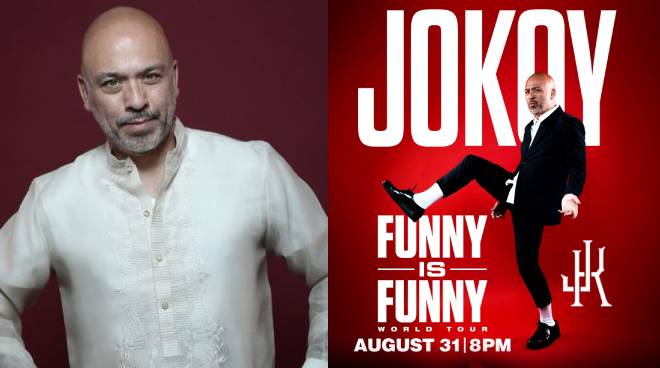 Filipino-American comedian Jo Koy is bringing his Funny Is Funny world tour to the Philippines this coming August.

Live Nation Philippines announced on Sunday, June 5, that the comedian will be returning to Manila to stage a show at the SM Mall of Asia Arena on August 31.

Tickets will be available on June 14 at 10AM via SM Tickets.

Jo Koy first performed in the Philippines back in January 2020 for his Just Kidding Tour. He did live shows in Manila and Cebu.

In an interview with CNN Philippines during his time in Manila back in January 2020, Jo Koy shared how he was able to nurture his comedic skills.

"I think Filipinos in general are just fun to be around. They like to joke around... I love the art of stand-up [comedy] but I think my roots came from my Filipino culture, our background. I always said when you don't have much, you use what you do have,” he said.

“So if you don't have money or whatever it is, then you use your talents and resources that you have with you, right? It's like funny and talent were always a big thing in our family, singing and dancing, you know, comedy, everyone was just joking around, food we always ate so it was very family-oriented," he added.

Aside from his Funny is Funny World Tour, Jo Koy's first studio film titled Easter Sunday is set to be released this coming August in the US.

The movie tells the story of a struggling actor and a single father who joins the gathering of his Filipino-American family on Easter Sunday.

Acclaimed director Steven Spielberg is the producer of the film.

In an interview with Entertainment Weekly recently, Jo Koy shared why the movie is called Easter Sunday.

"Well, Easter is just that day when Filipinos all come out. I mean, it's more packed than Christmas. That was the significance of that day. I felt like it's like an indirect way of saying this is for Filipinos. I don't think that many people celebrate Easter as hard as we do," he said.