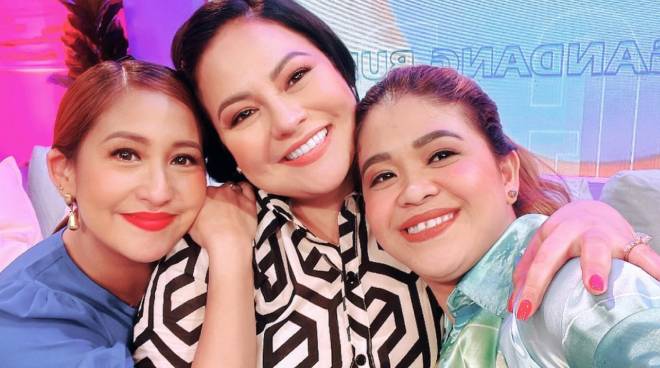 One of Magandang Buhay’s main hosts, Karla Estrada, recently returned to the show for one last time. Momshie Karla, as fans of the show call her, posted on her Instagram a photo of herself with the two other hosts Jolina Magdangal and Melai Cantiveros last Thursday, June 23.

She posted a cryptic caption with the photo, signaling that she would be leaving her hosting duties on the morning talk show.

“Happy to see you my Momshies!!!🥰🥰🥰 Ang Pamamaalam….ABANGAN! Good Vibes with all momshies,” she wrote.

Mixed reactions were seen in the comments section with most of them being sad that the original line-up of hosts would now be missing one.

TV show head writer Darla Sauler later on posted on her own Instagram account, confirming that Karla would be leaving the show for a new chapter in her life.

Karla recently ran for public office under the Tingog Partylist as its third nominee. While the partylist won, only the first two nominees would be getting a seat as they only won two seats in the Congress.

Tingog Partylist was one of the members of the Congress that voted “no” for the renewal of the ABS-CBN franchise. The partylist was then represented by Rep. Yedda Romualdez.

As of this writing, there has been no announcement yet for the airing of Karla’s final episode. Currently, Judy Ann Santos is the guest host for the morning talk show.