The ‘Flower of Evil’ cast was all praises for Lovi Poe’s acting prowess. 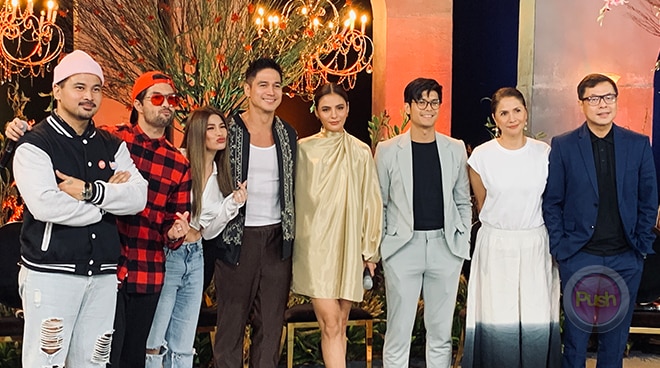 The much-awaited Filipino adaptation of hit Korean drama series Flower of Evil premieres on June 23 on the streaming app Viu. The cast and production crew had a press conference held last Monday, June 20, to give more insight as to how they created the Filipino adaptation.

During the press conference, Kapamilya actress Lovi Poe couldn’t help but be emotional as she remembered the cameramen and staff like Kuya Adler and Kuya Fred, who helped her adjust to the lock-in taping for the series. Flower of Evil marks the first project of Lovi as part of the Kapamilya network.

“My first day on set was difficult, kasi all of a sudden I'm in a new environment. Everything’s new, everyone’s new. It was hard. And as the days went by, I wasn’t myself in the beginning. I was having such a hard time, but with the help of everyone, it felt great,” she said.

READ: Piolo Pascual, Lovi Poe talk about working with each other in ‘Flower of Evil’

Denise Laurel, who plays the role of Grace, praised Lovi for the professionalism she showed ever since the beginning of their taping.

“Siyempre it’s so intimidating to come into a place and you’re the new girl and then you’re the lead and you have a lot of responsibilities on your shoulders. [Lovi] carried, she didn’t complain,” Denise tearfully shared.

Meanwhile, lead actor Piolo Pascual was one of the most excited after finding out that he’d be working with Lovi. The actor shared how they met at an event in Paris and how both of them wanted to work together for any project.

READ: Piolo Pascual and Lovi Poe are excited about their new series ‘Flower of Evil’

The whole cast and crew are excited for the viewers to watch what they’ve been preparing for months. After watching the first two episodes in Powerplant Mall last Sunday, June 19, Lovi felt like the first two was just the tip of the iceberg for the series.

Flower of Evil’s first episode will be available on Viu on June 23 across 16 countries. Meanwhile, it will be shown on A2Z and the Kapamilya Channel starting June 25.