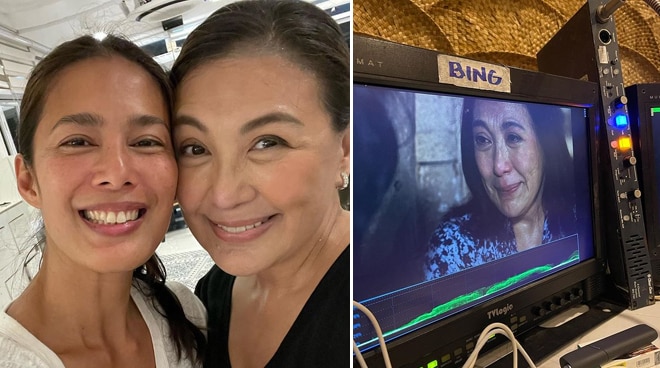 As one of the veteran cast members of the primetime hit series FPJ’s Ang Probinsyano, actress Angel Aquino, who plays the role of General Diana Olegario, has shared how grateful she is to be part of the show. The 49-year-old actress has gotten used to working with new co-stars joining the cast every year, but this time could not hide her admiration of Sharon Cuneta.

In her latest Instagram post, Angel shared how much she admired Sharon’s talent onscreen. She wrote, “I am on fan mode again. Couldn’t resist watching her from the monitor because I read this on the script. The scene was painfully quiet and long and she had to sustain her tears but I know how tired and probably emotionally drained she already was at that point. It was a heavy day for Mega.

“Yet magic still unfolded before my eyes; it was captivating. Her emotions were so real I could taste her tears and hold her pain.

“Lucas (Joseph Marco) was amazing too. He made good use of what Mega gave him and in the end they created an excellent, heart wrenching scene.

As a single mom to her two daughters Iana and Thea, Angel shared in a previous interview why she considers Ang Probinsyano a big blessing in her life. “Truly grateful. God knows kasi what’s best. So, he knows ‘di ba that I need to provide for the girls, ‘di ba?”

Angel has been part of the cast of the long-running Kapamilya series since 2017. Ang Probinsyano first aired in September 2015.