Miel Pangilinan clarifies, ‘I am not a lesbian’

Miel Pangilinan makes a clarification after coming out as queer last June 15. 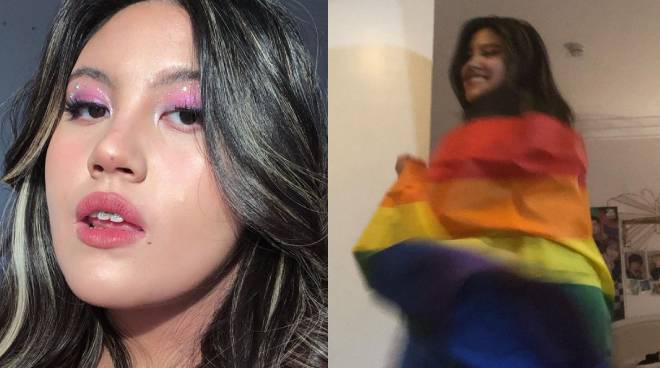 After coming out and announcing she was queer in her social media post last June 15, Sharon Cuneta and Kiko Pangilinan’s youngest daughter Miel admitted it was a really emotional and liberating time for her after making the decision to become open about her sexual identity. But the 17-year-old student also took time to correct a website who labeled her as being a lesbian in their article.

READ: Miel Pangilinan comes out as a member of the LGBTQ community

On her Instagram Stories, Miel reposted the headline about her which read “Anak ni Megastar na si Miel Pangilinan nag-out as lesbiyana ngayong Pride Month.” She called out the site for making the assumption that she was a lesbian.

“This is incorrect. I am not a lesbian, nor have I claimed to be. I stated specifically on the post that I am queer— and unless stated otherwise don’t just make assumptions that I’m a lesbian based on the fact that I came out or that I held a pride flag. Please inform yourselves. If I was a lesbian I would have said I was a lesbian.”

Aside from asking the site to take their post down, Miel also reminded them to research more before posting inaccurate information.

“I am queer. queer ≠ lesbian. If you’re going to inform people, inform yourself first. and at least give my post a proper read-through before making a post about it. It’s pride month. If you’re going to make a post reporting about a person’s whole IDENTITY, I should hope that you get it right. please. there are more identities than lesbian and gay lol.

“I also don’t NEED to talk about the boundaries and extents and specifics of my attraction/identity. It’s extremely personal and the fact that it’s something I need to clarify despite the including the statement that I am queer in my post is just upsetting. Identity is personal and if you’re going to report on it please stick to the source lmaoo.” Aside from her parents Sharon Cuneta and Kiko Pangilinan as well as sister Frankie Pangilinan sharing their messages of love and support, Miel has also received an outpouring of love from friends in and outside showbiz after making her post.