Charlie Puth has a collaboration with BTS member Jungkook. 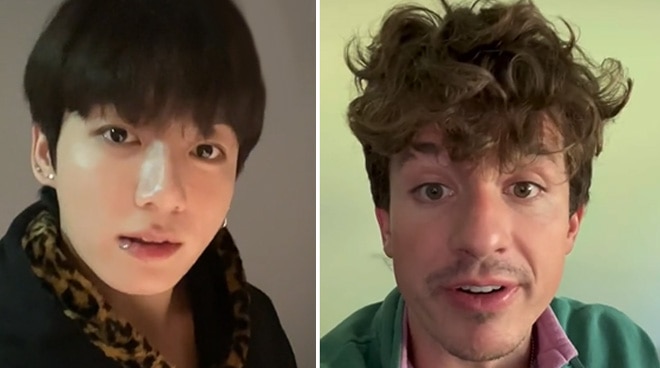 On his TikTok page, Charlie posted a snippet of his new song with Jungkook. In the video, Charlie can be seen instructing Jungkook to record lyrics for their new track.

One of the lines that Jungkook sang in the teaser goes, "Memories follow me left and right."

Following the announcement, fans on social media were quick to express their excitement about the song.

"I've been waiting my whole life for this!" one fan commented.

"OMG my favorite singers will sing together," another fan said.

"I love this song!!! Can tell that it’s really going to be good!!!" another fan commented.

It can be recalled that back in 2018 Charlie and BTS did a special collaboration at the 2018 MBC Plus X Genie Music Awards (MGA).

"Left and Right" is expected to be part of Charlie's upcoming album called Charlie.

In an interview with Apple Music 1's Zane Lowe in January, Charlie shared that his album was created through TikTok.

"I’m going to call the album, ‘Charlie’. It’s done. I’ve made most of it on TikTok. My goal for this album is for everybody to know every song title before it comes out. I love the fact that ‘Light Switch’ has been teased for months, and people are making bootlegs of it," he said.

He added, "Some producers have even taken, run it through Isotope, and taken the a cappellas and made their own versions of ‘Light Switch’. I love that. I think music should be twisted and pulled in many different directions. That was just the goal for this album, and I’m really excited for people to hear it."

Charlie remarked that TikTok became his creative outlet during the pandemic and it helped him make his new songs while connecting with his fans.

"[2020] was kind of a year of reset, but I was happy of that year of reset, because I really got to build up the TikTok thing, and everybody kind of made fun of me at first for focusing so much on TikTok. It is a safe place, and what I fell in love with originally is that people are being quirky and vulnerable," he remarked.

The teaser for "Left and Right" was posted following the announcement of BTS that they are taking a hiatus as a group to focus on their individual activities.

BTS made the announcement about their group hiatus during the YouTube livestream called  "Festa Dinner with BTS."

"We're each going to take some time to have fun and experience lots of things. We promise that we will return someday, even more mature than we are now. I just hope, that you could give us your blessing. That's what I hope for," Jungkook said in the livestream.

Read: BTS announces they are taking a hiatus as a group, opens up about their struggles

BTS member RM also announced that they will be releasing albums individually instead of mixed tapes.

"When people hear our group name, they say, ‘Oh wow, BTS.’ But honestly, people don’t really know who each of the members are. Since we’re singers, I think it’d be most impactful for us to show [who we are] through our music and performances. So from now on, we’re going to release [solo] albums instead of mixtapes," RM stated.