Wil Dasovich interviews Raymond Gutierrez about his not so positive experiences in showbiz. 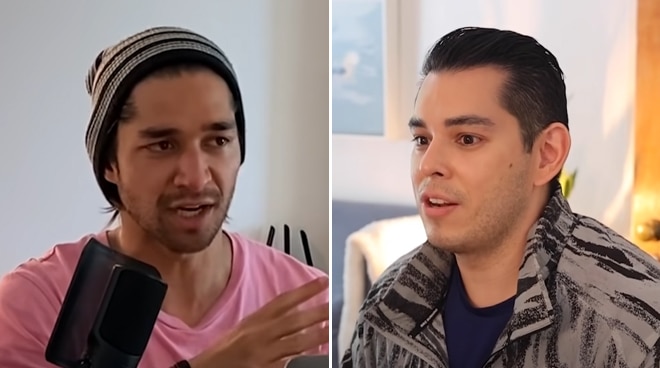 Considered one of the original travel vloggers in the country, Wil Dasovich expanded his online reach and started his own podcast called Wil Dasovich: SuperHuman last year where he described it as the channel “for more informative and personal content that will help you live a more adventurous and meaningful life, I promise!”

READ: Wil Dasovich on not talking about politics: ‘I work with ABS-CBN and I love the people’

In the podcast video he uploaded on YouTube last June 7 titled, “How Fellow GMA Artistas Bullied Mond for being Gay,” Wil interviewed Raymond Gutierrez, the twin brother of Richard Gutierrez and son of showbiz couple Eddie Gutierrez and Annabelle Rama. During the interview, Mond revealed his experience getting bullied by fellow celebrities when he was just starting out in the industry.

“I would walk down the hallway in GMA and they would be like, ‘Yan yung bakla di ba?’ Things like that. I could definitely hear them and they know that I could hear them. But they would really just taunt me in that way.

“But you know I’m not asking for an apology or anything like that. I’m just sharing what I was going through at that time. I think at that time I was new and was hosting. I think some people were also threatened that I was gunning for their jobs,” he shared.

Mond officially came out as a member of the LGBTQ community last year.

READ: Raymond Gutierrez has no regrets about coming out: ‘My old self would be very proud’

Wil also revealed a similar experience after his stint as a Pinoy Big Brother housemate in the show’s seventh season in 2017 where he was introduced as “The Cool-It Vlogger of Pampanga.”

“When I was vlogging, when I was having small roles when I was on television shows, they all looked down upon me and there were really big artistas that were so rude to me. I got like kicked out of the artista room because they didn’t understand me. I had too much energy as a kid,” he recalled.

Even though he did not stay long in showbiz, Wil revealed that the one veteran celebrity that he had a positive encounter with was actually Mond’s father Eddie Gutierrez.

“He didn’t hang out in the artista room. He sat outside. We had a sandwich together. He’s just talking to me in his Elvis Presley hair and he was like in a suit and everything. At the end of the day, that’s what it is. When people are rude or mean to you or upset, it’s just because they’re insecure with something within themselves which is their job,” he added.

Known for his optimistic nature, Wil admitted that he used the negative experiences he had in life to motivate him to better himself as a person.

“When I was getting bullied before I had a name or anything, I thrived out of that dark energy. Like that gave me motivation, even more motivation to succeed. I don’t know if it’s a healthy thing but it worked int he short term to get me to like keep studying and working harder,” he said.

After his breakup with his girlfriend of three years, cosplayer and vlogger Alodia Gosengfiao last November, Wil moved back to the US last May to live with his parents in California.