Kim Soo-Hyun on taking on new projects: ‘I would like to ask for your support and love’

Korean A-lister Kim Soo-Hyun talks about what he misses about the Philippines, as well as taking on new projects and endeavors. 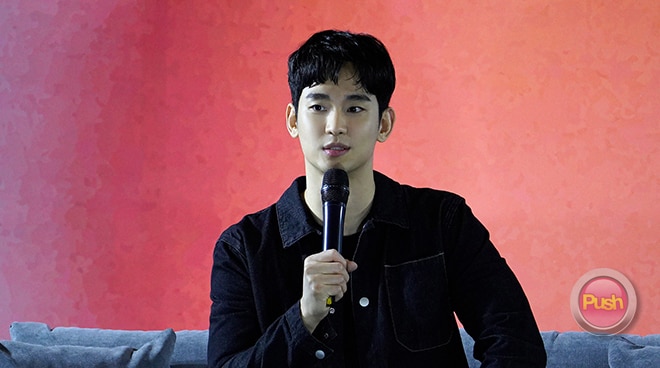 READ: Kim Soo-Hyun arrives in Manila for his fan meeting

Prior to the event, the Korean star, who is one of Bench’s Global Bench Setters, met with members of Philippine media.

When asked about what he misses the most, he went on to describe that Filipinos have the eyes of an angel. He said, “Actually, as mentioned earlier, the fans. The eyes of the fans, not just the fans but generally the Filipino people, they got the eyes of the angel. And the eyes have power, so I believe I miss them the most.”

One of the highest paid Korean actors, Kim Soo-Hyun has starred in many popular K-drama series and movies like My Love From The Star in 2013, The Producers in 2015, and his most recent series, the 2020 hit It’s Okay To Not Be Okay.

During the event, PUSH asked the actor: “As someone who has done many successful projects in the past, what other projects or endeavors do you wish to achieve?” To which he replied, “Though I have tried a lot of things, since I aged, there are a lot of things or more opportunities that’s actually in front of me. And as I age and as I take on more projects, my interest also differs so although there is nothing certain for now, I would like to ask for your support and love as I try my best to be a better actor.”

Soo-Hyun took on different roles and genres through the years. What is he hoping to take on next? “I am not actually into a character that I want to try, but maybe I can try the things that I have done again or maybe an antagonist, I can try that role as well. Other fans are also wanting me to try medical drama as well but it doesn’t mean that I am going to that. I will have to review first,” he shared.

Meanwhile, the Korean A-lister also shared what he would like to do on his personal time. He said, “As you know, in my personal time, I prefer playing bowling because it’s a very mental thing… it’s a concentration game. And I heard that golf also requires mental concentration so I am having my day on it.”