Denise Laurel underwent surgery to remove the cyst at the back of her head last Thursday, June 9. 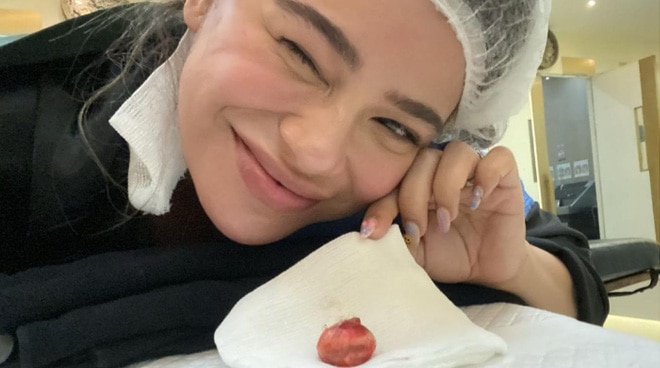 Denise Laurel surprised her followers earlier this afternoon, June 12, after sharing on Instagram a photo of the cyst that was removed from the back of her head. The actress had the operation performed last June 9, but only publicly discussed it three days after her surgery.

“06.09.22 I gave birth! lol jk Meet Harry the cyst haha Thank you to @draivee @drzteo and Doc Angeles for helping me get this little guy out who was resting in the back of my head!!! Sooooooo much relief from the pressure in my head that I’ve been just sucking up and dealing with,” she revealed.

The 34-year-old actress added that ‘Harry the cyst’ has been bugging her for quite some time already. She said she feels excited to get a better sleeping pattern now that the cyst has been removed from her body.

Meanwhile, she expressed her gratitude to the team of doctors who helped her with the successful procedure. Celebrity doctors Dr. Aivee Teo and Dr. Z Teo, who are currently on a vacation in Europe, still took the time off their leave to assist and answer all the questions the actress had even if they were thousands of miles away from the country.

“I am sooooooo grateful for them looking out for me even if they are in the midst of a beautiful vaca in Europe! Surgery was fast and easy! The team totally took care of me,” she added.

Right after her surgery, Denise revealed it was as if she didn’t just come from a procedure as she went to work right away.

Friends and followers of the actress stormed the comment section of her post, mostly saying they were shocked to find out that the cyst taken out of her head looked like an onion. They were quick to send their well wishes for her and prayed for her speedy recovery.