Mo Twister’s dog gets stolen and killed in Las Vegas: ‘I feel like I failed him’

Radio DJ and podcaster Mo Twister mourns the loss of his senior dog Bamboo whose kidnappers were caught stealing him on CCTV footage. 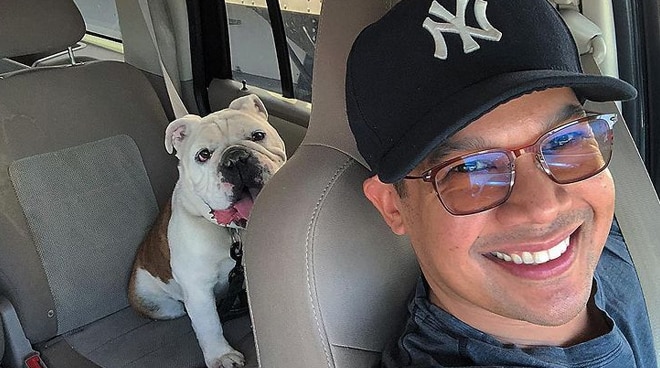 After more than two decades of working in Philippine showbiz, former actor Mo Twister moved back to the US in 2012 to be with family. He later married fellow radio deejay Angelicopter (real name Angelika Schmeing) last year in Iceland.

The veteran radio personality shared some devastating news regarding their senior pet dog named Bamboo who was recently stolen and killed outside their home in Las Vegas. Mo shared the news on his social media account last June 9.

He wrote, “Many of you knew Bamboo from Day 1. If you’d like, scroll thru my feed and the 10yrs of watching him grow and help raise our kids. I always wanted an English Bulldog and when we brought Bamboo into our lives in New York he was an instant hit! Everyone in the neighborhood stopped to pet him, even the Hollywood celebs! We moved to Las Vegas and Bamboo saw us raise the kids and he became their protector—an incredible guard dog. As he aged and started to show diminished eyesight/hearing, he still had the alertness and desire to keep us safe.

“Two days ago, he was taken from the home he protected so well for so many years. Three men who worked on construction next door from a company called Gonzalez Flooring here in Vegas tied a rope around his neck and led them into their truck in this summer heat. I have the cam footage [of them] driving away from our home with Bamboo. I saw these men yesterday and confronted them with the evidence and asked for my dog back. It got tense and the police responded and because the law has to have certain elements to warrant a felony, we just didn’t have enough — even though they admitted to stealing Bamboo. They said they stole him but let him go down the street from our home because they panicked.

“This morning his dead body was found in the area of the person who stole him. Nowhere near my home, an impossible distance for an old and nearly blind Bulldog to reach.”

READ: PUSH X LIFESTYLE: Mo Twister is living the life in the US as a dad of 3

In the same post, Mo could not help but share how traumatizing it was for him and his family to imagine the pain and terror their beloved pet must have gone through during the last moments of his life.

“I’d like to believe Bamboo put up a hell of a fight before they murdered him. I’d like to believe in his last moments he remembered our days in Central Park, the day Amsterdam came home for the first time, the endless toys and treats, the sofa he slept on every afternoon in my radio studio while I did the morning show and GTWM (Good Times With Mo).

“Most of all, I’d like to believe he didn’t suffer. But I’d be wrong. He suffered. In this immense heat, stuck in a truck at 104 degrees outside. I know he ended his life like a person on fire.

“The last photo in this post is his body, dumped from a truck in an open lot far away from home. I feel like I failed him and I’m in terrible pain thinking I did.

“You all can remember his life.

“I’m going to remember how he was taken and I will have my day.”

A local news station had already run a story on the incident which Mo was thankful for, as read in his most recent post. Mo thanked their Las Vegas community for helping bring justice to Bamboo.

He wrote, “While we continue to deal with our loss, I do think it’s only right to tell you all how much we appreciate the level of support we have received from you all. People who know us and people who don’t.

“I’d like to thank @8newsnow and others for featuring our story today in our continuing attempt to fight this.

“A million thank yous to the online community. We would have never recovered Bamboo if not for the Facebook/Instagram followers that messaged us that his body [was] found in Aliante, LV where the kidnapper resides.

“Thank you to our neighbors for the surveillance footage and for being out there on the street with us coming together for our neighborhood.

“The @lvmpd detective assigned to our case from the Animal Cruelty Division promised us his very best effort.

“The owner of the company, Gonzalez Flooring, also owns the truck Bamboo was last seen in. He was the guy that said he let Bamboo go in the streets near our home after admitting to police he stole Bamboo.

“I’ve heard people have called the business looking for answers and they changed their number today. I wouldn’t be surprised if they change their company name in an attempt to continue business.

“The co-owner is a nurse at @thevalleyhealthsystem. A nurse who is supposed to take care of life yet she’s married to the suspect and she was the contact person for the flooring company.

“You guys are battling for Bamboo and we can’t thank you enough.

“Run Free Bamboo, the killers will not be as fortunate.”

Mo’s friends from Philippine showbiz also gave him messages of support and love.

iamsuperbianca: “This is terrible. So sorry for your loss...”

iamkarendavila: “Oh my @djmotwister sending a hug to you and the whole family”

ryaneigenmann421: “I’ve seen most of your posts of bamboo since he was a pup... Your loss is our loss too brother. May those responsible get what they deserve. #justiceforbamboo”

bianca_valerio: “Mo, as I read this, I can feel so much pain, rage and sadness. I cry for you… I’m so so sorry this happened. I’m sorry for your loss, Mo.”

The 10-year-old family dog Bamboo shared a very close relationship with Mo and his two children, Amsterdam and Lucas (Angelika’s son from a previous relationship) as seen in photos from his feed throughout the years.