Andrea Brillantes and Ricci Rivero seem to be having the time of their lives while in Siargao for their first beach trip as a couple. 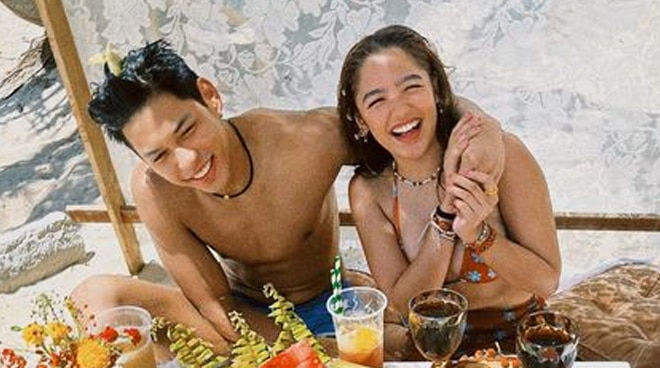 Andrea Brillantes and Ricci Rivero seem to be having the time of their lives while in Siargao for their first beach trip as a couple.

On Instagram, Andrea shared a series of snaps from their beach getaway which they enjoyed along with a couple of friends.

One photo sees the actress flaunting her toned physique in a red, two-piece swimsuit. Another shows her and Ricci all-smiles as they prepare to enjoy a sumptuous meal by the beach.

"Life lately," Andrea wrote in the caption of her post.

Actor-singer Alex Diaz and actress Ashley Colet were among those who joined the couple on the trip.

Andrea, 19, and Ricci, who just recently turned 24, have been dating since April.

They became an official couple after Ricci publicly proposed to the actress during a UAAP game held at the Mall of Asia Arena.

The two were first rumored to have romantic ties in February, after they were spotted dating at a restaurant in Taguig. Andrea then fueled rumors of a romance with Ricci when she was seen on social media wearing the UP Maroons basketball jersey bearing Ricci’s number 25.

Prior to dating Ricci, Andrea was in a two-year relationship with her onscreen partner and Lyric and Beat co-star Seth Fedelin. Ricci, meanwhile, was previously linked to his Happy Times co-star Sharlene San Pedro, but both dismissed the dating rumors.