The actress made her first-time appearance in Cannes a memorable one both for her and the people in the festival. 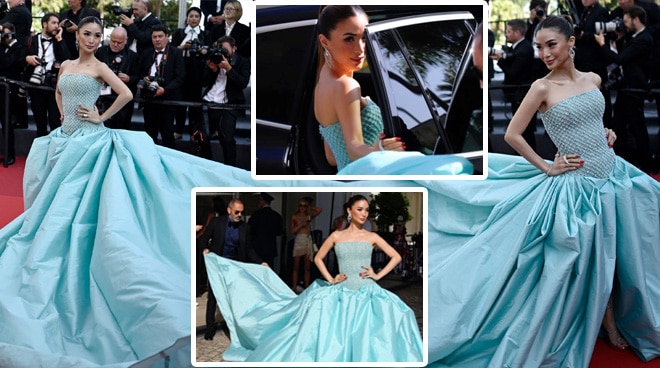 Heart Evangelista made her presence felt on the red carpet of the Cannes Film Festival last Thursday and Friday, May 27 and 28.

Having received an invitation to attend the event, her recent appearance marked her debut in the annual film festival.

Such a special moment ♥️ thank you @Festival_Cannes for having me ♥️ pic.twitter.com/zVrAn49Mjv

For her first appearance, the 37-year-old wore a stunning red gown that made her an instant scene-stealer on the red carpet. Lebanese-Italian fashion designer Tony Ward designed her gown. She completed the majestic look with a charming jewelry piece from Matara Studio.

“What a privilege it was to be able to grace the 75th @festivaldecannes red carpet tonight,” she wrote in the caption of her Instagram post.

On her second day, the actress graced the red carpet once again to attend the screening of the French film Un Petite Frere. This time around, Heart wowed those in attendance as she wore a marvelous Tony Ward-designed sky-blue strapless gown. The socialite made heads turn once more during her second red carpet walk.

Aside from attending the prestigious film festival, Heart made time to attend one of the events that she proudly advocates for – fighting against the stigma and discrimination against people living with HIV.

She attended a gala event organized by AmFAR, a non-profit organization that helps with AIDS research. The actress wore a lovely pink fringe dress partnered with a hot pink clutch.

“It was an honor to be invited to the prestigious @amfar fundraiser gala tonight. I stand in solidarity with all AIDS advocates who hope to spread awareness about the disease. Thank you for bringing meaning to this advocacy,” she said.

The 75th Cannes Film Festival took place last May 17 until May 28 in Cannes, France which paid homage to the film The Truman Show and made it as their official poster for the year.