BTS has been invited to the White House for a discussion with President Joe Biden. 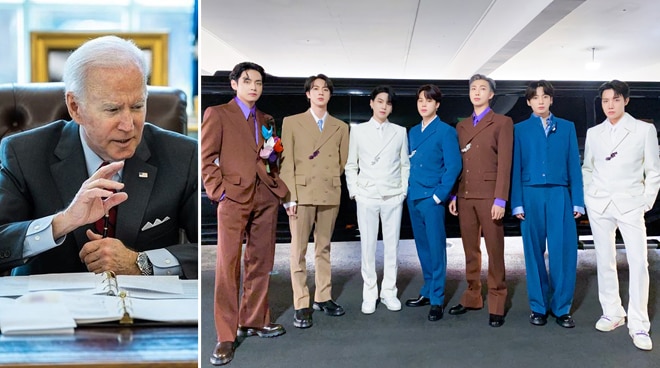 Global boy group BTS has been invited to the White House for a discussion with US President Joe Biden.

On Thursday, May 26, the White House announced that the Korean group "will join President Biden to discuss Asian inclusion and representation, and to address anti-Asian hate crimes and discrimination which have become more prominent issues in recent years."

The boy group will also be discussing with the president "the importance of diversity and inclusion and BTS' platform as youth ambassadors who spread a message of hope and positivity across the world."

BTS will meet President Biden on Tuesday, May 31 at the White House.

BTS has been vocal about condemning anti-Asian racism. In March 2021, the boy group took to social media to denounce the surge in violence against Asians in the US.

Using the hashtags #StopAsianHate and #StopAAPIHate, the boy group said in a statement last year: "We cannot put into words the pain of becoming the subject of hatred and violence for such a reason. Our own experiences are inconsequential compared to the events that have occurred over the past few weeks. But these experiences were enough to make us feel powerless and chip away our self-esteem."

In the same statement, BTS stressed that they stand against discrimination.

“What is happening right now cannot be dissociated from our identity as Asians. It required considerable time for us to discuss this carefully and we contemplated deeply on how we should voice our message. But what our voice must convey is clear. We stand against racial discrimination. We condemn violence. You, I and we have the right to be respected. We will stand together," the boy group stated.

In 2018, BTS also launched with UNICEF the "Love Myself" campaign, a global campaign which aims to help end violence and abuse among children and teens.

In 2021, BTS and BIGHIT Music pledged over $1million to UNICEF as they renewed their commitment to the "Love Myself" campaign.