Richard Juan shares how his company 28 Squared Studios became part of the  concert. 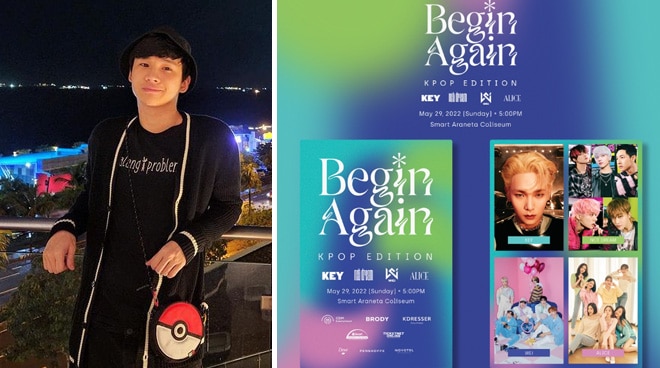 The concert, which will happen on Sunday, May 29 at the Araneta Coliseum, will feature Korean acts like NCT DREAM, Key, WEi, and ALICE. Richard’s 28 Squared Studios became one of the concert’s sponsors.

“I always have a soft spot for Korean content, like Korean Dramas or K-Pop. I’ve always admired how creative, talented, and hardworking Korean performers and producers are, especially after my first experience shooting in Korea back in 2019 with tvN Asia,” he said in an interview with PUSH on why he decided to collaborate with the concert's producers.

Richard relayed that he was supposed to host the concert. Unfortunately he will not be able to do so hence he decided instead for his company to become part of the concert.

“I am very fortunate to be invited to be part of 'Begin Again' from my friends at CDM Entertainment initially as one of the hosts at the concert especially since this would be the first K-Pop concert since the start of the pandemic. But sadly due to conflicting schedules, I will not be able to take part. However, we were able to come up with an understanding that my company, 28 Squared Studios, will be a part of the event and contribute our part towards making this a successful show!” he remarked.

Asked on what fans should look forward to in this concert, Richard relayed, “This will be a huge treat for the K-Pop fans because this is the first since pandemic! I know all of the K-Pop fans miss attending concerts! And really, I’m sure the performers speak for themselves too!”

Richard remarked that he has always been an admirer and supporter of Korean acts. “As a fellow talent myself, seeing and knowing the dedication these people put in their craft is just inspirational,” he said.

What can his fans expect from him and his company moving forward?

“We started 28 Squared Studios at the height of the pandemic. There were so many things that were limited so as the restrictions globally ease up, we’re excited to already be working on several projects in the pipeline. I don't want to spill too much because I might end up jinxing it but I’m trying to make some things work in my recent travels!” he stated.