Feeling challenged with their task, the housemates were in for a surprise as their friends made an appearance to help them conquer. 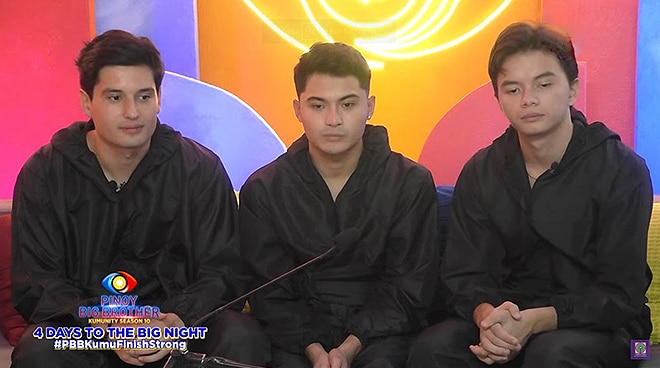 The housemates had to build a tower for each of their batches––celebrity, adult, and teen––and one more tower as a team. After building the said towers, the housemates would then have to bring it to the activity area.

Without the housemates’ knowledge, ninjas were sent to the activity area to shake the towers they had constructed. The housemates were resting when the ninjas destroyed the towers. While most of them were in shock with what happened, this was the perfect time for the former housemates to come in.

Eian, Laziz, and Luke entered dressed as ninjas themselves, and greeted the housemates. After seeing Eian, fellow celebrity housemate Sam Bernardo couldn’t help but be emotional seeing her batchmate pay them a visit. Sam reminisced and recalled with Eian how their closest friend in their batch, volleyball superstar Alyssa Valdez, couldn’t make it as a biga10 housemate due to scheduling conflicts.

READ: Samantha Bernardo will return as a PBB housemate

Meanwhile, teen housemate Gabb Skribikin was ecstatic to see her friend Luke and the two became inseparable after seeing each other. Adult housemate Isabel Laohoo was also excited to see Laziz.

While it was a short stay inside the house, Eian, Laziz, and Luke made sure to give helpful tips to the housemates on how to defend their towers in order to succeed in the challenging task given to them. However, they failed to bring their towers to the activity area as it fell while they were bringing it there.

The Biga10 Big Night will be happening on Sunday, May 29, 7 PM. Viewers could buy their tickets at ktx.ph for Php 250 and Php 99, respectively.