Tirso Cruz III and his wife Lynn Ynchausti marked their 41st wedding anniversary on Wednesday, May 25. 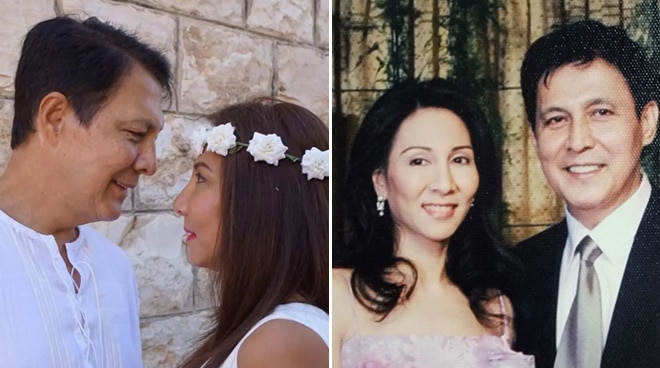 They may be miles apart, but Tirso Cruz III and his wife Lynn Ynchausti still found a way to make their 41st wedding anniversary special.

On Instagram, the veteran actor penned a lengthy message sharing why he can’t physically be with his wife while remembering his son who passed away in 2018. He is currently in Ilocos for the lock-in taping of FPJ’s Ang Probinsyano.

"GODly heavenly morning TJ. It's our 41st wedding anniversary today. Sayang lang I won't be able to celebrate it with your mama because I am here in Ilocos for taping," he wrote in the caption of his post.

Then again, Tirso promised to celebrate the special occasion once he gets home.

"Anyway, we'll celebrate na lang when I get home. Missing you more during special occasions like this. Love you Teej!” he stated.

Lynn, on the other hand, took a trip down memory lane as she penned a lengthy message about their married life.

"When my husband and I got married on May 25, 1981 we didn't have pictures. So we did pictorial months or a year after, with me wearing a bridal gown and my husband wearing a Barong Tagalog (as seen in the 1st photo). The second photo was on May 25, 1986, on our 5th Anniversary, when we renewed our marriage vows officiated by the late Rev. Doy Castillo,” she said.

She went on: “The 3rd up to 5th photo were taken during our 25th wedding anniversary, with very few and closest friends and family members attending. In 2016, just before our 35th wedding anniversary, we prayed to the Lord for provisions so we can travel to Israel with our children and renew our marriage vows in Cana, where the Lord performed His very first miracle.”

“Praise God, the Lord provided, so on April 19, 2016, we got married again (last 5 photos) with no other than our dear Pastor Nomer Bernardino officiating. To add, to our weddings mentioned, we still had other renewal of marriage vows, I think twice or even more, during our marriage encounter seminars and church services when the pastor would ask who would like to renew their vows," she continued.